Kellan Lutz, Penn Badgley, Jessica Szohr and others watched the sun set over the Hudson River on Tuesday night. 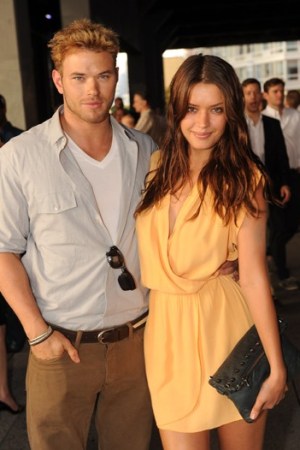 Around sunset on Tuesday night at the first ever Summer Party on the High Line, recent New York party scene institution Kellan Lutz turned to model Michea Crawford to check on her glass.

“How’s your drink?” the actor, dressed in a gray button-up and brown pants, asked. “Do you need another one?”

WWD had just asked for a hypothetical 30 seconds of his time. Eyeing the stopwatch on the digital recorder, it seemed that he was taking the request literally.

“Oh I have a bandana just like that,” Lutz said in rapid fire. “Is that an umbrella? I love your shoes. Your glasses are amazing. Ten more seconds.”

Penn Badgley and Jessica Szohr sat on benches behind the actor on the park’s Diller von Furstenberg Sundeck. Other attendees at the party, presented by Coach Men’s Collection, included David Byrne, Jen Brill and Sky Ferreira. Bartenders handed out Grey Goose vodka-enhanced popsicles. A half a block to Lutz’s right, revelers lined up to have Coach luggage tags made. The actor looked at a billboard above 15th Street.

At least another 30 seconds secured, the “Twilight” actor explained why he’d been such a fixture on the New York scene lately.

“I’m doing a movie called ‘Syrup’ with Shiloh Fernandez, Amber Heard, Brittany Snow, and it’s amazing to work in New York,” he said. “I shoot two to three days a week. I have more off days so it feels like a vacation. I have an apartment here.”

Proceeds from the party were going towards upkeep of the elevated park, so had he spent much time on the High Line?