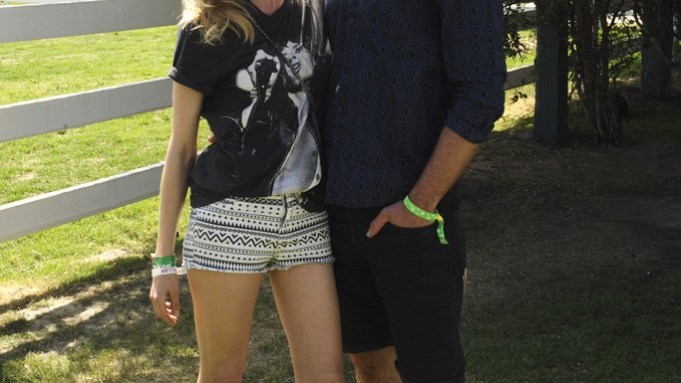 The Coachella Music and Arts Festival in Indio, Calif., drew 80,000 fans to the Palm Springs desert over the weekend. A slew of fashion parties kept everyone cool and quenched during the day, while scorching rays, an eerie sandstorm and a small army of bands at the Empire Polo Club provided plenty to take in.

Kicking things off on Friday, BGBG Max Azria and Benefit Cosmetics joined forces for a glorified hair and makeup session at a private estate where starlets like Lucy Hale primped in public. A collective of brands, including Forever 21, Revolve and Swatch, gathered at the Saguaro Hotel in Palm Springs for the aptly named Weekender three-day party, where Juliette Lewis, Giovanni Ribisi and Alexander Wang made the scene. Later that night, Diesel and Edun celebrated their African-inspired denim collection at Studio Africa in Indio Valley with Rolling Stone, drawing guests such as Emma Roberts, Fabrizio Moretti and Teresa Palmer. Before Solange took the stage to play a DJ set, Bono joined Baloji for an impromptu performance. Stephen Dorff and John Legend also kicked back to enjoy the music.

RELATED STORY: They Are Wearing, Coachella, Weekend One >>

“I was at the festival all day” said late arrival Jessica Paré. “We saw the Yeah Yeah Yeahs, Passion Pit, Band of Horses…a lot of bands. We just did all of it.”

The next day, at a private estate in Thermal, Calif., Lacoste’s pool party was the first stop (at noon) for Katy Perry, Chris Pine, Alessandra Ambrosio and Rita Ora. Partygoers enjoyed poolside manis and pedis, noshed from gourmet food trucks parked by a man-made lake and played a round of boccie on the lawn. Pine shielded himself from the sun in a cabana, while sucking on a Patron-infused Popsicle.

Also on Saturday, festival sponsor H&M hosted a pool party at the Merv Griffin Estate where Santigold and The Dough Rollers played for a crowd including AnnaSophia Robb, Jason Wu, and couples Diane Kruger and Joshua Jackson, and Sophia Bush and Justin Chatwin. While none of the celebrities actually submerged themselves into a pool, there were plenty of scenesters who weren’t afraid to get their hair wet.

RELATED STORY: Ones to Watch at Coachella >>

On Sunday, House of Holland eyewear feted its latest collection poolside at the Saguaro hotel. Agyness Deyn played DJ for guests including Pixie Geldof and Nick Grimshaw. Henry Holland was on the lookout for design inspiration: “I just saw a girl walking around the pool with some impressive eyewear who will probably spark some creative planning.”

Nearby, the Guess party at the Viceroy hotel featured a more relaxed vibe. Between dancing to DJ Lindsay Luv and Classixx and playing rounds of Ping-Pong, attendees Ashley Benson, Riley Keough, Katharine McPhee and Chloë Sevigny posed with water guns and other warm weather props.

“Phoenix killed it last night,” said Joe Jonas, who came with brother Nick. “It’s my third year coming to Coachella. I just really love the festival and checking out the music.” For those who still aren’t partied out from the festival, there is a replay next weekend.