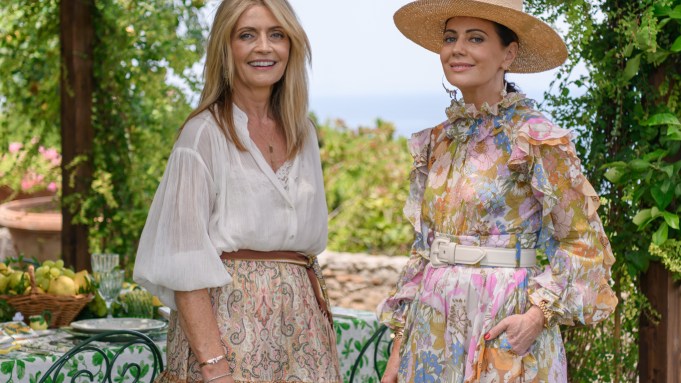 CAPRI — Che chic! No better Italian expression — which translates into “how chic” in English — can describe the vibe sisters Nicky and Simone Zimmermann injected into the two-day event the Australian company organized to fete the opening of its Capri store.

The program kicked off on Thursday night with a dinner at Capri’s legendary and elegant Il Riccio restaurant, located on the cliffs by the Blu Grotto sea cave and ended on Friday afternoon with an extended lunch under a lemon pergola in the lush garden of the exclusive Villa Bismarck.

Both the happenings not only surprised the taste buds with traditional specialties of Caprese cuisine, but also featured sophisticated flower and fruits table arrangements, and hand-painted plates.

The Zimmermann sisters’ typical laid-back and friendly attitude took center stage during the events, which drew celebrities including Laura Dern and Katie Holmes.

“I’m putting together my second film called ‘Rare Objects.’ I’m going to direct that and also act in it, so I’m very excited,” said Holmes, who will film the movie, expected to be released next year, in New York City.

While Holmes revealed her ideal vacation is spending time with the family, Jessica Hart can’t wait for August to go back for the third time to the music festival Burning Man.

Asked if she is already working on the outfits for the event in the Californian desert, she seemed to be in an upcycling mood. “I still have a lot of the stuff I can reuse from past years,” Hart said. “Actually, I have a storage full of Burning Man stuff, so I just go in when I’m are ready to go.”

Hart, who is also the founder of makeup and skin-care brand Luma Beauty, is also working with her sister on creating a blog with wellness ideas that they’ve collected over the years. “It will be based around mindfulness and moving your body, nutrition and just tips all around, beauty tips, beautifying your life. We are working with our team in Australia, that’s been consuming our minds the past couple of month,” she said.

While she continues to work on her Gryph & IvyRose wellness line for children and is also promoting the capsule she designed for Cybex, a German company focused on mobility for children, Karolína Kurková will take a break for work this summer to rediscover life’s simple pleasures.

“I will be taking a little holiday with my family; we have a house in Turkey, so we’ll go there. We have friends that meet us there from all around the world so we go to local markets to buy all the fresh cucumbers, tomatoes, peaches…all the amazing spices and they are just fresh products. We make lunch, make smoothies, and just go to the beach, play games, work out, explore,” said the model-turned-entrepreneur. “And then I’m going to be spending time with my family in the Czech Republic with the boys [Kurková’s children Tobin and Noah Drury]. So we’ll be in my grandma’s house where I used to go when I was a child, cook sausages on open fires on the grass, eating on the grass, we like that and for me it’s cool that my boys get to experience my roots because we live in the U.S., so it’s nice they get to really see their grandmother, who’s 81.”

No family trip but a grand 30th birthday party is the plans of Phoebe Tonkin, the Australian actress who starred in “The Originals” and “The Vampire Diaries.”

“I go to Paris next week for a week for couture. I’m going to a show on Monday and then I’m going to go to Saint Tropez and then go back to New York for my 30th birthday party,” she said.