The President's biggest fans spread the word at parties all over Washington this past weekend. 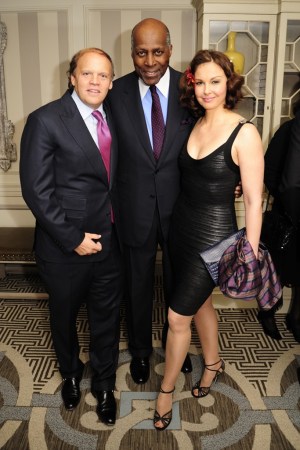 Like “Aliens,” “Star Wars Episode V: The Empire Strikes Back” and “The Godfather: Part II,” sometimes it’s all about the sequel. For Barack Obama’s biggest fans, who spread the word at parties all over Washington this past weekend, the President’s second term will be a whole lot punchier than the first.

“I’ve had three hours sleep, and I can’t have a serious conversation,” insisted Valerie Jarrett, the President’s closest and longest serving adviser, who turned up at Buffy Cafritz’s state-of-the-art inaugural party at the Madison Hotel on Saturday. Flanked by Chicago pals including Jesse Jackson, and two former Obama White House chiefs of staff — Chicago Mayor Rahm Emanuel and former mayor Bill Daley — Jarrett promised a brave, new Obama blockbuster in the making. “We’re going to break the mold. We’ll have a bold second term, I’m convinced of that,” she said.

Bruce Babbitt, also in the crowd, agreed. “The second term will be better because President Obama knows what he wants and how everything works,” said the former Arizona governor and Bill Clinton’s Interior Secretary. “New blood will be good,” he added, referencing all the new faces due to arrive in Obama’s Cabinet and White House staff as longtime colleagues depart for different pastures.

That game of high stakes musical chairs had political insiders buzzing. Out in the hall at the party — which was cohosted by Cafritz and her husband, William; Vernon and Ann Jordan, and Roger and Vicki Sant — Sen. Edward Kennedy’s widow Vicki huddled with Massachusetts Rep. Ed Markey. “I’ll tell you what that’s all about,” confided one veteran Washington backroom operator, who insisted on anonymity. “Markey wants [Massachusetts] Gov. Deval Patrick to appoint Vicki to John Kerry’s Senate seat. That way she acts like a bookmark. Markey can run for the Senate without having to give up his House seat.”

As for Kerry, whose Obama-appointment as Secretary of State awaits confirmation by the Senate, New England Democrats are all lining up to wish him well.

“I am so happy for John. He deserves the job, and he’ll be great at it,” said one friend.

Noticeably missing from the high-profile party scene was Kerry insider Matthew Barzun, 42, who is expected to land the much-coveted job of Ambassador to the Court of St. James. A former Senate intern for the Secretary of State-designee, Barzun is a descendent of John Winthrop, the first governor of Massachusetts, and Lucretia Mott, a proponent of women’s rights. A former CNET executive, he left his post early as ambassador to Sweden to chair Obama’s finance committee and now seems poised to reap the reward.

While Barzun and his wife, Brooke, dodged all the private parties, they were expected to attend the best one of all — the President and First Lady’s private White House dinner Monday night after the cameras stopped rolling. Among the 300 guests who were there dancing until the wee small hours were Alicia Keys; Kerry Washington; Gene Sperling, director of the National Economic Council, and his wife, Allison Abner; Jennifer Hudson, and Jamie Foxx.

So what about Anna Wintour’s reported hopes for being Obama’s woman in London? While State Department insiders say privately it isn’t going to happen, no one wants his name connected to the notion that Wintour may not get her dream of landing an ambassadorial appointment.

“Anna would make a superb ambassador,” said fellow Brit Tina Brown, who imagined her own dream ambassadorial job representing “the Four Seasons hotel on the Bosphorus, that’s where I’d want to be.”

“She loves Istanbul,” confirmed husband Sir Harold Evans. “But do you know, what country do you think has the most journalists in jail? Not China, and not Russia. It’s Turkey — Prime Minister Tayyip Erdogan is squeezing his people.”