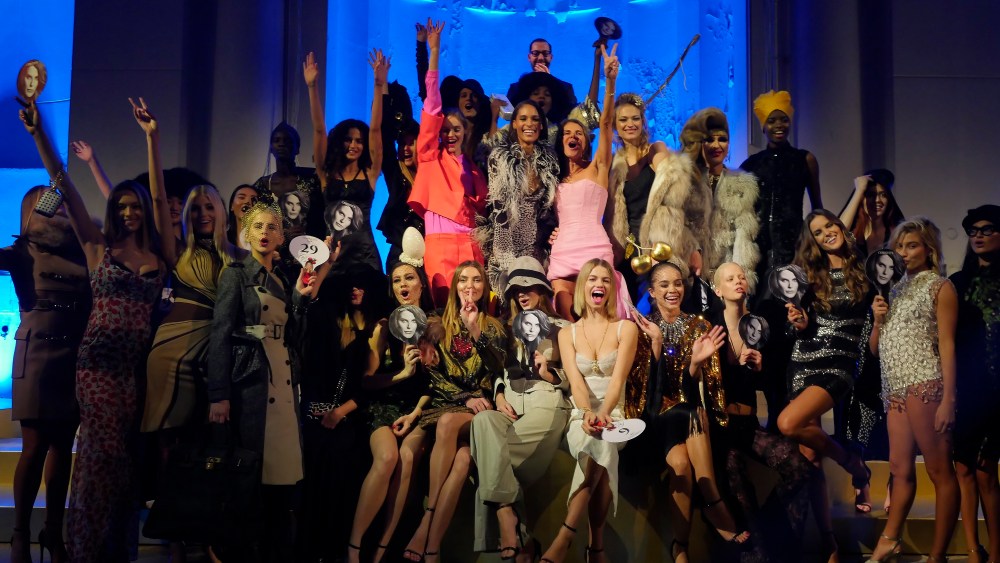 MILAN — Fashion-week events often feel institutional. But when Anna Dello Russo is the host, the chances of having a good time are much higher.

The one hosted on Saturday night by the volcanic Vogue Japan fashion director, in collaboration with Swarovski, actually met the expectations of guests, who were immersed in Dello Russo’s world. This included a flamboyant set with multicolor lights like those decorating the streets of Southern Italian villages during local festivals; inflatable cartoon versions of the editor; and waiters serving Puglia’s traditional taralli crackers in straw baskets — a reference to the region from which she hails.

The three-part night at a palazzo in the heart of Milan kicked off with an auction conducted by Christie’s and sponsored by upcoming Qatari retail and real estate development Place Vendôme — the paddles featuring a portrait of Dello Russo herself. The 32 lots — paraded in a fashion show by models such as Alessandra Ambrosio, Maria Borges and Chiara Capitani — were full outfits from her extensive wardrobe. Bids started at 50 euros, but quickly escalated into the thousands. The sale collected 147,000 euros that will be donated to London fashion school Central Saint Martins though the Swarovski Foundation.

“I’ve always been extremely jealous of my clothes, which I collected as vestiges — actually I still love them, they are still so interesting to me, they will always be, fashion will always fascinate me — but this is the moment for me to open my collection and donate to other people, from the young fashion assistant to the most important photographer. It’s just the right time to donate,” said Dello Russo. “Last year, I lost two people who were so important for me and I realized it was time for a change. I wanted to organize something to mark the end of an important phase of my life…It’s a karmic moment for me.” Asked about her future plans, Dello Russo demurred.

“I wanna be Anna Dello Russo,” exclaimed an amused Sophia Neophitou-Apostolou, editor in chief of Ten Magazine, who scored a 2012 Balenciaga by Nicolas Guesquière dress, accessorized with a headpiece and high-heel sandals.

Among those opening their wallets was designer Neil Barrett, who bought a beautiful Yohji Yamamoto black coat from 1996. It came with a Stephen Jones for Marc Jacobs fur hat, Yohji Yamamoto ballerina shoes and a Nail Europe umbrella from the Fifties.

“Anna is craziness, she’s like a nonsensical, fantastic, off-the-world, crazy, fun-loving, figurehead,” Barrett enthused. “She just represents having fun, being silly, really not being totally serious in the industry. And many people love that and many people dislike that but she’s really made a sense, made a difference in social media. She’s really pushed to create that space for herself and then so many people are following her, so she’s been trailblazing in that, so really, brava, Anna.”

The most successful lot, netting 13,000 euros from Swiss heir Carl Hirschmann, included a 2012 Burberry trenchcoat designed by Christopher Bailey which came with a large Hermès travel Birkin bag and Burberry loafers, while an impressive Gareth Pugh feather and crystal headpiece was sold for 12,000 euros.

“I’m here with Natasha Poly, and the Emilio Pucci dress designed by me they just auctioned was actually worn by her on the catwalk in 2009…it’s such a great coincidence,” said Peter Dundas, who attended the event with his business partner Evangelo Bousis.

“Anna was the first person to believe in me. I started at Condé Nast with her at L’Uomo Vogue in 2003. She is my mentor,” said Giovanna Battaglia Engelbert. “We always have so much fun together but she also is the one who taught me the importance of discipline. And trust me, sometimes it was not fun!”

Among Dello Russo’s fans, there is definitely Alessandro Dell’Acqua. “At the beginning of my career, I was consulting Alma and at one point they told me that Anna Dello Russo was hired to do the styling,” said the designer. “I was so worried, but then she arrived and we clicked immediately. Almost 30 years have passed and we are still good friends. She is a special one, she helped me so much during my career…I actually love her.”

Dello Russo also played a key role in the launch of the Fausto Puglisi brand. “Anna was the first to give me the confidence I needed…I mean, if someone who is used to wearing Saint Laurent, Dior, Gucci, Dolce & Gabbana and Versace suddenly decides to wear your clothes almost everyday during each fashion week, this gives you a lot of energy,” Puglisi said. “I’m a bit emotional today because I know this is the end of an era. She is a woman in love, she’s happy and serene. As her friend, I feel that I can say it seems that she has got her life back. There used to be an Anna who was like a fashion elf. Now there is much more, so let’s celebrate her.”