Partying Over the Launch of NYFW: Men’s

Celebrities, sports stars and more gather to celebrate the arrival of the men's shows in New York. 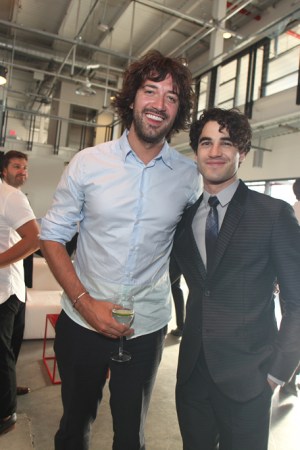 That was the mood among American men’s designers Monday night at the end of the first day of New York Fashion Week: Men’s as the city at last got a men’s fashion week of its very own. The hope is that it becomes a permanent part of the global men’s calendar, eventually rivaling Milan, Paris and a resurgent London (which the New York shows are closely copying, even down to the structure of the name).

So the men’s fashion community naturally had celebration on its mind, gathering first at the shows’ official venue, Skylight Clarkson Sq, for a photo op. Council of Fashion Designers of America president Diane Von Furstenberg joined Alicia Glen, New York’s deputy mayor for housing and economic development, who said the four-day event “will only strengthen New York City’s role as the fashion capital of the world.”

“Fashion and manufacturing have been a foundational part of New York City’s economy for over a century — and we know that the industry is more vital than ever to our economic future,” she said.

Glen also revealed the city is committing another $1 million to the Fashion Manufacturing Initiative, which was launched in 2013 “to preserve and grow local manufacturing.”

This investment, along with an additional $2 million pledged by the CFDA, brings the total committed to FMI to $6 million.

Steven Kolb, chief executive officer of the CFDA, said, “The men’s market is stronger than ever. According to NPD Group, men’s apparel sales in the U.S. grew 2 percent to $62.7 million. By creating New York Fashion Week: Men’s, the CFDA is committed to furthering that growth and giving American men’s wear designers a greater advantage in the global economy.”

The official speeches over, the partiers then trekked across the river to Williamsburg in Brooklyn to give homage to the company that stumped up a large chunk of the money needed to mount men’s fashion week: Amazon. The Web giant’s fashion sites — Amazon Fashion, East Dane and MyHabit — are the presenting sponsors of NYFW: Men’s.

Standing in the e-tailer’s 40,000-square-foot Imaging Studio, Cathy Beaudoin, president of Amazon Fashion, glanced around the jam-packed room filled with designers, NBA stars, models and entertainers, and was, not surprisingly, upbeat. “This is just electric,” she said. “It feels like the start of something good. It’s an idea that just feels right and whose time has come.”