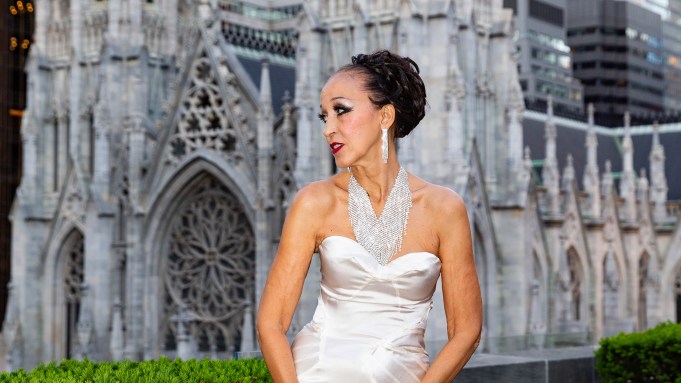 Guests of Manolo Blahnik’s summer party knew that Pat Cleveland would be one of the evening’s guests, but what they didn’t know was that she would be surprising the audience with a live musical performance.

The party was held at 620 Loft and Gardens, up on the roof in Rockefeller Center with a view of midtown Manhattan. In the midst of mingling, Cleveland suddenly danced her way into the crowd, clad in a slinky silver silk gown, a diamond necklace and a cat-eye, and took to the mic.

“It’s a full moon, and we want to party and be glamorous as you all are,” she told the crowd, before breaking out into her first song, Perry Como’s “It’s Impossible.”

Guests including Elizabeth Lail, Emily DiDonato, Genevieve Jones, Sarah Hoover, Casey Fremont, Christine Evangelista and more were in attendance, many of them in the famed Manolo heels.

“Manolo would sit in the corner and sketch and make all these little drawings and I just thought ‘Manolo, you should be a shoe designer’ — well, he is!” Cleveland mused between songs. “And we love him so much.”

Before switching into a Josephine Baker song, Cleveland encouraged the crowd to get into the groove should they feel comfortable.

After her performance, Cleveland revealed that this won’t be the last time we’ll get to hear her sing: she’s releasing an album later this year, composed of love songs in the American Songbook.

“I think everybody sings. Sometimes you just collaborate and you make the art because you love it,” she said. “And we love to make people happy and make people dance.”

Pitti Faves: Retailers Reveal Their Must-see Spots When the Show Is Over