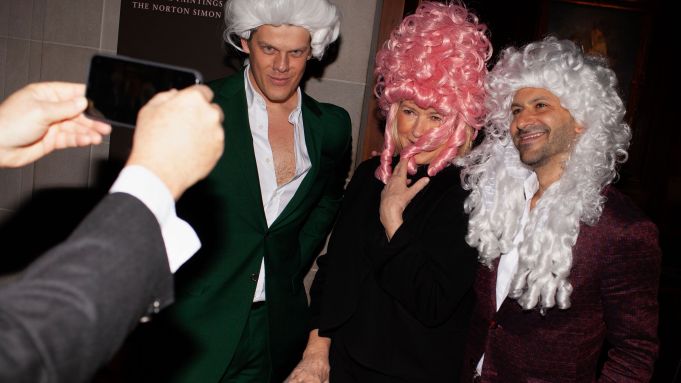 “Really, this is a miracle collection,” said Paul Arnhold from the Portico Gallery at The Frick Collection. The walls of the narrow gallery were lined with porcelain Meissen pieces from the collection of his late grandfather, Henry H. Arnhold, and many had come particularly far before landing at their new home. The inaugural exhibition, “Henry Arnhold’s Meissen Palace: Celebrating a Collector,” got a proper unveiling on Wednesday night, with an elegant seated dinner in the Garden Court cohosted by Arnhold and Wes Gordon.

The collection was started in Dresden, Germany, by Paul Arnhold’s great-grandparents Lisa and Heinrich Arnhold, who were acquiring early Meissen pieces owned by Augustus II the Strong. The ruler and arts patron had founded the first porcelain manufacturer outside of Asia, which was the Meissen Porcelain Manufactory.

“My great-grandmother Lisa Arnhold got the collection out of Dresden right before World War II, before it was seized by the Nazis. So that was fortuitous moment number one,” Arnhold said. The collection went to the de Young Museum in San Francisco during the war, and Arnhold’s grandfather began adding to the family collection when he was in his 70s and living in New York.

“He was acquiring pieces up until the day that he died; he died last year,” Arnhold said. “I was receiving packages from dealers and auction houses up until three months ago, so he was shopping until the very end. He lived with these pieces in his apartment and he loved them so much.”

Arnhold’s two favorite pieces are located toward the back of the gallery, “The Beguiling Pot,” which is in fact not a pot at all, and a white crane sculpture which was created for Augustus the Strong.

“I think I remember the actual objects well before I realized how important they were, but I remember I was a little kid and the porcelain was all over the apartment, on every table top, on pedestals, from floor to ceiling,” said Arnhold of growing up around his grandfather’s collection. “And my grandfather always told the story that my dad’s biggest source of pride was that he grew up playing soccer in the apartment and he never broke a piece.”

Arnhold’s father was a little more worried about pieces breaking as the gallery filled up with people; luckily, most of the items were bolted down. Guests included novelist Donna Tartt, Martha Stewart, Lili and Howard Buffett and Sarah Hoover; many were dressed in Carolina Herrera for the occasion, which was also hosted by Julia Arnhold and her husband. And lest the evening take itself too seriously, what with the string quartet and fine porcelain and all, the wigs slung on the backs of each dinner chair added an element of humor to the evening (and the many selfies that ensued).

“Paul and I have known each other for ten years, so I got to know Henry very very well — he was the flower boy at our wedding in Las Vegas. He was a truly remarkable man,” said Gordon before dinner, who was also well acquainted with the collection. “He lived with the collection all in his apartment. We’d go on Sundays and have Chinese takeout with him, sitting with [the porcelain] around us.

“He’s deeply missed, very beloved, so this was a fun night to welcome his treasures to a new home,” he added. “He really collected for the real reason, which is that it made him happy.”