For its spring gala Wednesday night, the New Museum asked three artists to donate works for an auction. 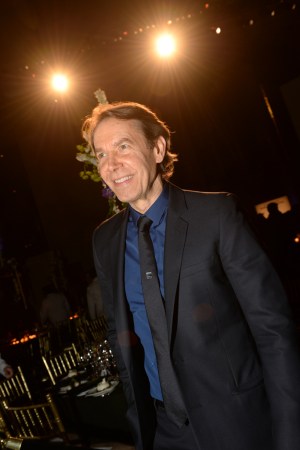 For its spring gala Wednesday night, the New Museum asked three artists to donate works for an auction. Mary Heilmann gave up one of her colorful canvasses and Ed Ruscha offered one of his word paintings. But they were upstaged, as is his wont, by Paul McCarthy. Right there in one of Cipriani Wall Street’s grand halls, the museum had installed one of McCarthy’s sculptures resembling sex toys, a smaller-scale version of the phallic monument he erected last fall in Paris’ Place Vendôme to much public outcry.

A ribbed, bright Crayola-blue monolith, this one looked almost solemn on a pedestal under its own spotlight.

In France, McCarthy may have caused a scandal, but here the piece was merely the subject of passing fascination, a curious artifact that at least offered some amusement for the gala-weary. Onlookers approached it gingerly, not sure whether to take its picture or pose with it. Talk about a selfie stick.

Francisco Costa seemed riveted as he snapped away with abandon. “It’s amazing,” he said. “It’s kind of a Klein blue, but not. An acid Klein.” Was he planning on bidding on it? “No, thank you very much.”

A good chunk of the art world — John Currin and Rachel Feinstein, Aby and Samantha Rosen, Cindy Sherman, Marilyn Minter — turned out here not to snicker around another one of McCarthy’s gags but nominally to pay tribute to Dodie Kazanjian, the former Nancy Reagan press secretary turned Vogue contributor, and her husband, the longtime New Yorker critic Calvin Tomkins, “The Adam and Eve of art writing,” as the slick Italian curator Massimiliano Gioni described them.

But it was hard not to linger around McCarthy’s handiwork to talk about it some more, particularly when Jeff Koons was in the vicinity. Was it a joke? A dare? Koons was intrigued. The two artists have enjoyed a long and healthy rivalry, or more like an aspiring rivalry, since Koons looms so large above everyone else in the art world today. He sits at the very top of the heap while McCarthy has been shooting spitballs in his direction from the sidelines, like the inflatable dog he erected outside the Frieze Art Fair two years as a comment on Koons’ own Balloon Dogs series.

Not that Koons holds any grudges.

“It looks great,” he said about the McCarthy. “I love the color. I like the form, the materials. I love everything about it, even the base.” In any case, this town seems big enough for the two of them. Lonti Ebers, the vice president of the museum’s board of trustees, won the sex toy during the auction. Price: $200,000.