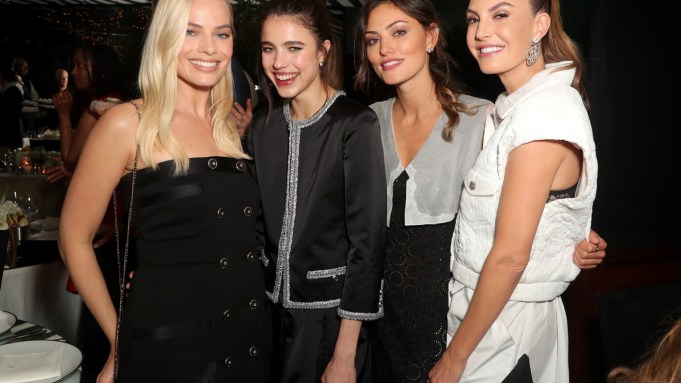 When Penélope Cruz took home her Academy Award for best supporting actress in 2009 for Woody Allen’s romantic comedy “Vicky Cristina Barcelona,” it was the very first trophy awarded that night.

“I remember I sat there and then they said the name, and everything happened so fast,” said the Spanish actress at Charles Finch and Chanel’s annual pre-Oscar dinner, held on the eve of the award ceremony in Los Angeles. “I felt happy that it was that way, because if you have to wait for that for two hours…the state of nerves, you know? It’s such an adrenaline trip.

“But I only remember half of the night, because everything was so intense,” she continued with a laugh. “I always feel, I would like to have the whole night recorded so that I realize everything that happened, because I feel like I only experienced it halfway.”

She’ll attend the show again this year as presenter: “It’s a great celebration of cinema. I’m really happy for Pedro [Almodóvar] and for Antonio [Banderas].” Spanish film “Pain and Glory,” directed by Almodóvar, is nominated for best foreign language film, while Banderas is up for best actor. “I’m just happy to be celebrating my colleagues’ work, to be here to do that.”

Cruz, a Chanel ambassador, was impossible to miss in a bright pink tweed jacket and skirt, a look from the spring 2020 ready-to-wear collection.

For years Charles Finch and Chanel have hosted the event at Madeo, squeezing A-list stars like Cruz inside the small Italian eatery’s original Beverly Boulevard address. Though temporarily relocated on Camden Drive in Beverly Hills — while renovations are under way to redevelop the former West Hollywood location — for the second year in a row the party was at the Beverly Hills Hotel’s legendary Polo Lounge. Still, it was elbow-to-elbow during cocktail hour, held in the open air outside the restaurant.

“Excuse me, sorry,” repeated Margot Robbie, nominated for best supporting actress for “Bombshell,” as she passed through the crowd. She opted for a strapless black jersey dress by the French house.

Nearby, Demi Moore stood with Robert De Niro. “How are you?” they asked one another in unison.

Moore had on a tweed jacket and pants by the brand, which dressed about three dozen attendees. Cynthia Erivo, up for best actress for “Harriet” and best original song for the film’s tune “Stand Up,” also chose an all tweed look — an ivory, ecru and pink dress with a black coat. Actress Kaitlyn Dever, off the heels of winning best first feature at the Independent Spirit Awards earlier that day for “Booksmart,” also wore the woolen cloth that’s become synonymous with the label. She had on a tweed jacket, which she paired with a white cotton top and calfskin pants, while Diane Kruger opted for a short tweed jumpsuit. Standing out in a black velvet and tulle dress with an eye-caching necklace and flat boots — all Chanel — was rising “Mickey and the Bear” actress Camila Morrone.

“This is my favorite thing I’ve ever worn,” she said. “I’m just so excited to be here. I’m such a fan of Chanel and everything they do.”

Arguably the most glamorous of Oscar pre-parties, the party is now in its 12th year of celebrating fashion and film. By the entrance, guests were entertained by music courtesy of its habitual mariachi band before making their way inside. The menu was classic American, a caesar to start, followed by the option of fried chicken, steak or a veggie option made with roasted cauliflower. For dessert, as psychedelic rock band Blac Rabbit played Beatles covers — a new addition to the night — it was ice cream sundae.

“It’s my first Oscars,” shared the actress, who stars in TV drama “Outlander.” “I’m looking forward to tomorrow, to be in that room.”

“Once Upon a Time in Hollywood” costume designer Arianne Phillips is also heading to the award show, though it’s not her first time. She’s been nominated for two other Academy Awards in the category.

“This one is special,” she said of this third recognition, visibly moved. “To have so many of us nominated, it’s been wonderful.”

Robbie donned Chanel in the film — a classic, black flap bag from the era — Phillips continued. “Sharon Tate wore Chanel…it was those scenes where she’s watching herself at the movie theater.”

“I’m rooting for ‘Once Upon a Time in Hollywood,’” shared “Bombshell” actress Allison Janney at Cadillac’s own annual Oscar bash on Thursday night. The Quentin Tarantino flick is up for Best Picture.

“I think it has to do with the time that I grew up,” she said. The party, held at Chateau Marmont, also brought out Qualley, Rachel Brosnahan and Greta Gerwig with Noah Baumbach. “It resonated with me in a way that I haven’t had a movie do in a long time.

“I’m kind of rooting for Leo[nardo DiCaprio],” she added. “And Brad Pitt, I love. I love those two so much. I love my Margot, Saoirse [Ronan], Laura Dern. There are so many people I hope will win. I did my voting, and we’ll see what happens.”