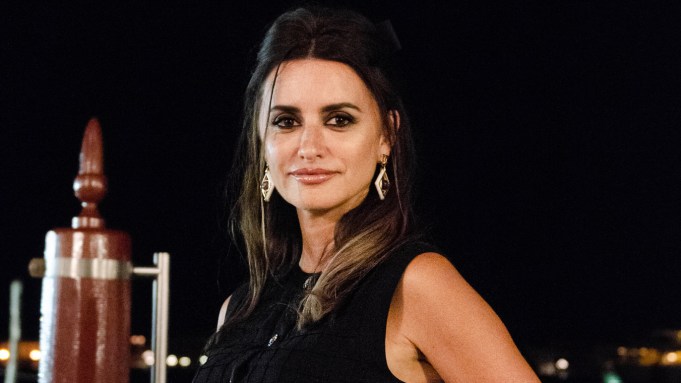 VENICE — Honoring what is becoming a Venetian tradition, Chanel hosted its annual soirée at the legendary Harry’s Bar during the 79th edition of the film festival here on Monday.

With the cinematographic event in full force after a week packed with premieres and stand-out red carpet moments, the gathering saw guests including Penélope Cruz, Tilda Swinton, Darren Aronofsky and Sadie Sink catching up over Bellinis and sharing opinions on what was presented so far as well as what to expect in the lead-up to the final award ceremony, slated for Saturday.

Unveiled on the eve of the Chanel event, Cruz’s latest movie “L’immensità” sees the Oscar-winning star play Clara, a Spanish mother of three children who deals with a dysfunctional family — encompassing domestic violence by a cheating husband and the issues of gender dysphoria of her eldest daughter Adri — in ’70s Rome.

“It was challenging, which made me very happy because that’s what I look for,” said the Chanel ambassador about the role. “This is a woman that goes through a thousand different stages and moods in the two hours that you see her during the film. She’s a fighter, she’s trying to maintain a family together. A family that is very unhappy, that is not working and she’s having to go through domestic violence — both herself and her children.”

The relationship with the character of Adri, played by Launa Giuliani and based on director Emanuele Crialese’s experience, is central to the film. “Their characters live in a similar prison: [Adri] is asking extraterrestrials to take her away because she feels she’s trapped in a wrong body and she feels more like a boy than a girl but she doesn’t know how to put it into words and she finds this connection with her mother, who can understand her the best considering that they are part of a family that wants to look away and doesn’t want to accept that.”

Escapism is offered in fantasy sequences where Clara and her children dance to hits of the late singer Raffaella Carrà — making for a scene that is set to strike a nostalgic chord particularly with Italian pop aficionados. “They have this bonding through their suffering and the escape sometimes is through the variety shows they see on television when they imagine this is themselves dancing and singing, just hoping one day they can feel that freedom, which is a metaphor for the freedom of just being themselves,” Cruz said.

The parent-child dynamic takes center stage also in Darren Aronofsky’s new movie “The Whale,” which also premiered Sunday and has already generated award buzz for the interpretation actor Brendan Fraser gave as a reclusive English teacher living with severe obesity. His character attempts to reconnect with his estranged teenage daughter, played by “Stranger Things” star Sadie Sink, for one last chance at redemption.

“I’ve never honestly read a script anything like this,” Sink said. “Samuel Hunter is the playwriter and adapted the screenplay and the way that he writes these characters is just so detailed and complex. Every time I read it I find something new,” added the actress, underscoring that “it was easy for me to find the empathy in her” character.

While a six-minute standing ovation at the end of the screening left Fraser teary-eyed, Sink shared her enthusiasm for the overall experience at the festival. “We’re all really proud and this is the best place to premiere your movie,” Sink said.

In an interview with WWD ahead of the Chanel event, Swinton further chimed in on on-screen mother-and-daughter relationships as she offered a preview of her latest work “The Eternal Daughter,” directed by longtime friend Joanna Hogg and premiering on Tuesday.

“This film is something that is very personal to both of us,” said Swinton, who plays filmmaker Julie Harte, a character that viewers of her previous movies “The Souvenir” and “The Souvenir: Part II” also directed by Hogg, are familiar with, as it was interpreted by Swinton’s own daughter Honor Swinton-Byrne.

“This is Julie Harte, 25 years later, taking her mother Rosalind to celebrate her 75th birthday in a hotel, which used to be a house that Rosalind knew very well when she was a child. So it has this sort of emotional significance to take her back to this place. And it’s few days between mother and daughter.”

As Swinton highlighted the importance of working with friends like Hogg, Cruz shared the sentiment and approach on the set of “En los márgenes,” or “On the fringe,” the second film she will present in Venice and that she developed with her friend since they were teenagers, Juan Diego Botto.

Asked about movies and personalities that played a pivotal role in convincing her younger self to pursue a film career, the Spanish actress could not avoid mentioning another friend, director Pedro Almodóvar, “all his actresses, and the work of Meryl Streep.”

Even though she has portrayed an array of characters throughout her career, Cruz said the list of dream roles is endless. “Everyone is unique, so there will always be more fascinating personalities to discover and to play, which doesn’t mean that I want to shoot non-stop. I make one movie per year, or maybe two if I can make them in the city where we are. I don’t separate from my family in the winter, but work in the summer so that we can go altogether. So it’s tricky. It means I have to say ‘no’ to a lot of things but my priority is to be with my family.”

A longtime face of Chanel, Anna Mouglalis identified in Italian neorealism the pivotal movement in sparking her passion for cinema, pointing to movies by Vittorio De Sica as game-changers. Conversely to France’s tradition of bourgeois cinema, “in Italy after the war that cinema was really dealing with the life of people struggling, like those amazing actresses, so beautiful but not in crazy dresses, just working like in the rice fields, for example,” Mouglalis said.

“That’s what moved me the most and I guess that’s why I wanted to make cinema….That humanism of after-war, after the horror — that’s what drove me to thinking that movies can change life because you can share pain, but you can share hope and dreams, too. And this is why fiction is very necessary for me,” Mouglalis said.

Sitting on the jury this year, French director and screenwriter Audrey Diwan knows the importance of the Venice festival and of scooping the Golden Lion prize, having won the award last year with her movie “L’événement.”

Diwan said she is always be looking for the “unseen,” either in the form of an original script or outstanding performance by actors. “I love topics for myself as director and I look for that in others’ work, something that is attractive and risky at the same time,” she said.

“And that’s good because I spent the last three years talking about pain, so I deserve pleasure,” Diwan said with a laugh.