The entire hotel was turned into a giant party, attended by key political, business and fashion figures. 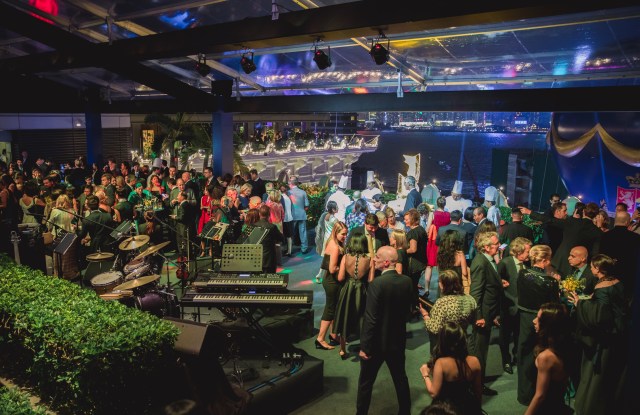 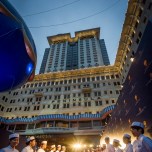 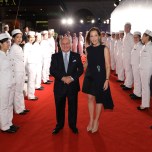 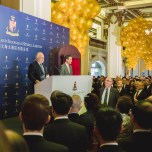 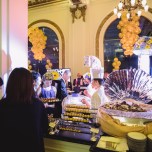 The party was visible from the city’s waterfront and afar, with eight giant helium balloons tethered to the heritage building. Guests arriving on the red carpet walked past two Rolls Royce Phantoms in a nod to the signature car service of the hotel, including a vintage 1936 Phantom III from the private collection of Hongkong and Shanghai Hotels (HSH) chairman Michael Kadoorie.

The company, which was then known as The Hongkong Hotel Company, was first incorporated in 1866.

Kadoorie welcomed guests recalling the opening of the Hong Kong hotel in 1928, the group’s foray into hospitality. The Kadoorie family owns and operates key landmarks around the city including the Peak Tram and The Repulse Bay, which are intertwined with much of Hong Kong’s history as a colonial shipping port.

After Hong Kong’s top politician CY Leung gave a toast, guests roamed the hotel indulging in sumptuous canapes from different restaurants and bars located within the property. The hotel had prepared 2,000 bottles of champagne and 43.2 kilograms of Beluga caviar for the crowd to enjoy as multiple live bands kept the festivities going well past midnight.

“We are the oldest registered company in Hong Kong, and we believe we are one of the oldest hotel groups in the world in continuous operation,” said Clement Kwok, chief executive officer of HSH. Despite the company marking its 150th birthday, Kwok said the company was “still at a youthful stage”.

HSH has grown to include ten luxury hotels within its network, with new properties under development in Istanbul, Yangon, and London.