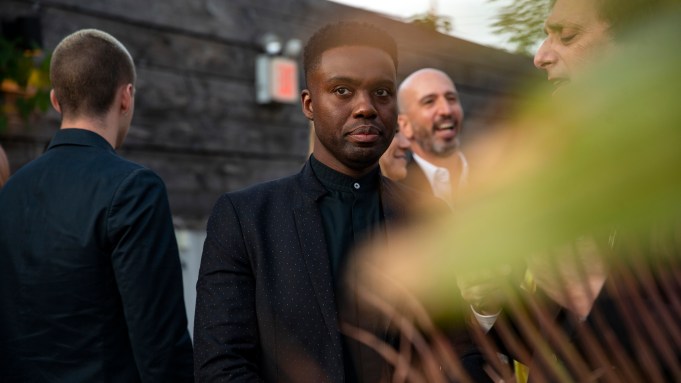 “It’s a whole new world — and really quite a long drive, I had no idea,” said Performa founder RoseLee Goldberg from the outdoor courtyard at event space 99 Scott. “I really admire you all for having the courage to step off Manhattan. We’ve all had an unusual 36-month year. Who knew a year could last 36 months?”

In fall 2020, in lieu of its annual in-person fall gala, Performa pivoted to host an eight-hour telethon fundraiser, which paid tribute to pioneering video artist Nam June Paik and featured performances by Performa alum. The event supported Performa’s 21 Biennial, which took place in the fall and included eight artist commissions spanning the city, from the streets all the way to the beach in Far Rockaway.

“If one’s looking for a way to recover, being amongst artists and making work with them was really our savior,” added Goldberg.

Performa, known for its creative event dress codes and immersive gala concepts — in line with the organization’s dedication to live performance art — delivered on all fronts on Wednesday. The evening began with cocktails with a four-piano performance of an Julius Eastman composition, and a call for guests to paint one of the birds on display in a side room in honor of artist Joan Jonas; the artworks were displayed on a clothing line for all to see.

The dress code was black and white — with a splash of yellow, as blankets were distributed to guests left chilly as they took their dinner seats outside. After Goldberg’s welcome, poet Joan Retallack performed a long-form poem she’d written in Pendleton’s honor, “Agon in Black and White.”

“[Agon] has to do with a physical and/or spiritual struggle that can be jovial or grave,” Retallack offered before launching into her piece. “In classic rhetoric, the agon is the central argument in an impassioned speech with a lot at stake.”

Afterward, Roya Sachs appeared on a second floor balcony overlooking the dinner courtyard with a pair of garden shears and got to work. Strips of barrier tape, printed with Performa’s logo and Pendleton’s iconography, hung overhead; each donation of $1,000 pledged to the organization resulted in Sachs cutting one of the strips, which unfurled down upon the crowd.

“Performa, what they do better than anyone else, is to pull together an unconventional and memorable and incredible evening,” said Sachs.

More Party Coverage From the Eye:

Inside the Frick Spring Garden Party 2022