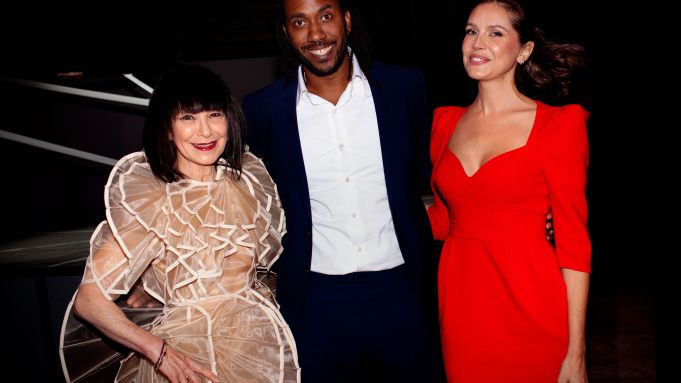 The legacy of the Bauhaus — the German experimental art school that closed in 1933 — was on rampant display Friday night at Performa’s annual gala. Inside Stage37, guests were overwhelmingly dressed in their pick of the primary colors (red and blue proved more popular than yellow), the first of many nods to the Bauhaus influence on the art world.

Yvonne Rainer was transfixed by the cocktail hour dance performance choreographed by Emily Coates, who has been working with the legendary Post Modern choreographer to reimagine one of her scores, “Parts of Some Sextets,” for Performa’s biennial this month.

“It wouldn’t have happened without Emily Coates, who’s wandering around in a green outfit,” said Rainer, as Coates prepared to unhook the straps connecting her dancer onstage to various points in the room. “I would have never thought of reconstructing this dance.” Coates was inspired to broach the idea of piecing the dance together using archival photos and text after spotting a 50-year-old photo from the original performance at Judson Memorial Church. The photo showed 10 people perched on a pile of mattresses — Rainer and the various dancers of her piece, including Robert Rauschenberg, Steve Paxton and Robert Morris. Coates and Rainer have been rehearsing the piece since the summer. “We patched it together,” she added, as a singer across the room started prompting the crowd: “come come come to the table.”

“I’m a huge fan of their work; I’m a Performa virgin,” said Stella McCartney, making her way to her seat. “I’m actually coming to support my friend Dasha [Zhukova] who’s getting an award — simple.”

Sitting for dinner, guests were greeted by rolls of white paper, tins of pencils and their first art lesson of the night: draw two circles continuously, then a figure eight. Drawings were passed along, then hung up using clothes pins above each table. Later, tubs of brightly colored sauces were distributed along with paintbrushes, with instructions to start painting on the white dinner plates. (The “paints” were all edible.)

“Back to school, back to the Bauhaus,” said Performa founder RoseLee Goldberg, taking the stage. “It’s very important that we take you through some of these exercises so you can learn what an extraordinary school that was.”

In addition to offering up a few rudimentary art lessons and paying tribute to Bauhaus instructor Oskar Schlemmer, the gala honored contemporary artist Rashid Johnson and art patron Zhukova, who founded the Garage Museum in Moscow.

Johnson, a Performa board member, credits the organization for stoking an interest in directing after he staged his first performance piece, a reimagining of the play “Dutchman.”

“As a result I did move on to participate as a director and got to make a film that some folks got to see, ‘Native Son,'” he said of his feature, which premiered earlier this year. “A lot of the confidence that I had making that project was born out of getting to do the project with Performa.”

Architect Liz Diller of Diller Scofidio + Renfro next introduced Zhukova to the stage, in the voice of a familiar personality: Siri.

“I woke up this morning with severe laryngitis, but I wanted to come out in support of Dasha tonight, so I decided to get some help,” said Diller via a recording as she stood onstage with a smirk. Diller’s firm designed The Shed, of which Zhukova was a founding board member. “Thank you for defending our city as a place of creative production in a time of rampant consumption,” she — Siri? — added.

“As I stand here tonight, I’m thankful to have grown up in a family and a community which truly value creative expression,” said Zhukova, the daughter of Russian oligarch Alexander Zhukova (and former wife of billionaire FC Chelsea owner Roman Abramovich). “I’ve been extraordinarily fortunate to learn from the artists, architects, historians transforming the art collection and curation space in the 21st century,”  she added. “Just as the Bauhaus movement created a platform of creative convergence 100 years ago, we as artists, architects, designers, entrepreneurs, have the opportunity to affect social change. By connecting policy makers, investors, artists and the public at large, we can shine a light on the potential for a more vibrant and sustainable urban future.”