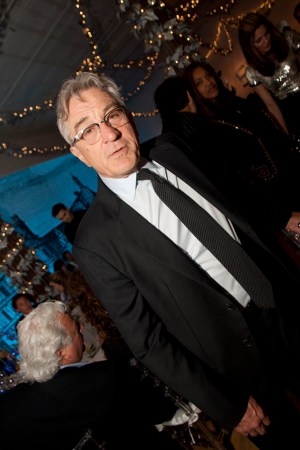 Who says flower crowns are exclusive to Coachella?

At the Tribeca Ball on Monday night — an annual affair, sprawled out over all six floors of the New York Academy of Art — there were plenty, thanks to the ball’s fairytale theme conceived in collaboration with Van Cleef & Arpels (the jeweler bankrolled the event for the sixth year in a row). The ball, which supports the graduate school’s scholarships and public programs, honored Peter Brant this go ’round and just a few of his friends — Larry Gagosian, Aby Rosen and Samantha Boardman, Vincent and Shelly Fremont, Olivier Sarkozy and Mary-Kate Olsen, John and Joyce Varvatos, John Currin and Rachel Feinstein, Vito Schnabel, Eileen Guggenheim, Calvin Klein, Gavin Brown, Kenny Scharf, Dan Colen, Dustin Yellin, Nicole Miller, Parker Posey and Lauren Remington Platt — turned out to salute the art and publishing tycoon. The invitation called for wardrobe attire in “regal hues,” which, at a glance, seemed lost on even the fashion savviest of crowds.

Guests traversed the school’s narrow stairwells to take a look at the artworks of the Academy’s MFA students, passing by a colorful cast of stilt walkers, contortionists, and even a hot pink unicorn; it was a veritable circus. Up on the fourth floor, a caricaturist was sketching guests near a live accordionist, where Bob Colacello was making the rounds. “One piece I liked downstairs was called ‘Justin Bieber Has Feelings Too’ and it was in this very ornate red frame with sparkles,” he said. “This event is great because even if some of the art is unformed, there’s so much energy behind it.”

Further up, partygoers posed inside an interactive candy forest — a near-re-creation of the board game Candy Land, except here, a half-naked model pranced around with taffy and lollipops — inspired by the work of Will Cotton. The set, created by alumni artist Mike Gibson, was ripe for Instagram moments. “I had some inkling they were working on it, but I had no hand in it,” Cotton said. “I build my sets by hand first, and then I make paintings from them, and then my sets are gone. So it’s going from 3-D to 2-D, and now back to 3-D again….I love that.”

Robert De Niro, a longtime friend of Brant’s, kept to himself for most of the evening. He did say that he had yet to see Brant’s latest property acquisition — the former studio of the late Walter de Maria on East Sixth Street in Manhattan’s East Village. Brant reportedly bought the space for $27 million in August. He christened the space with a Dan Colen exhibit back in December. “Where is it?” De Niro asked incredulously.

“It’s so encouraging to be honored for something that has been essential in my life forever, a love of art,” Brant said to the packed house during dinner. “Meeting Andy [Warhol] was important because he taught me that beauty was everywhere, and it stayed with me my whole life.”

“I’m really proud of him,” Harry Brant, rocking a purple velvet suit, said of his father. “He seemed a little nervous to give his speech which was really endearing.” Harry’s mother, Stephanie Seymour, wore a silver sequined Yves Saint Laurent dress from 1968, her hair pulled half-up with a purple butterfly clip. After dinner, she gave Peter Marino a loving embrace. “I’m obsessed with his body,” Seymour said as she pawed at Marino’s physique.