Courting the upper crust is an adjunct duty of Copping's new role as creative director of Oscar de la Renta — one that de la Renta himself fulfilled with gusto. 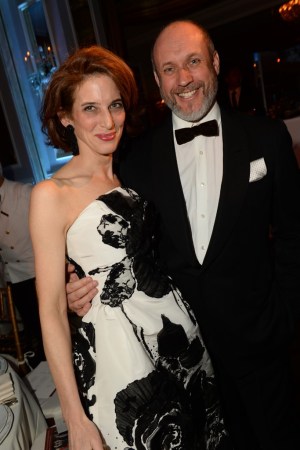 Peter Copping slipped into cocktail hour at the Museum of the City of New York’s Winter Ball like a veteran of the social circuit. “I have to say, I’ve been to quite a few functions since I arrived three months ago, that’s for sure,” he said shortly after his arrival. “I think that I’ve been out in New York already more times than I went out in 20 years in Paris.”

Indeed, courting the upper crust is an adjunct duty of his new role as creative director of Oscar de la Renta — one that de la Renta himself fulfilled with gusto. “One thing is, I’m never going to be Oscar and I don’t want to emulate him, but this was something that was important to Oscar,” he said of the fund-raiser, which the house sponsored. “I think he was out pretty much every night of the week — he was a very social man. So, yes, I want to keep that going, but obviously in my own way.”

The gala also came at an opportune time for Copping, a week after his runway debut (“That’s always a big relief, when it’s out of the way…”) and days after Sienna Miller wore one of his designs on the red carpet at the Oscars, earning her many a best-dressed-list ranking. “There were a couple of dresses [Sienna] was interested in,” Copping said. “What I was really happy with is that she didn’t mind the idea of them coming straight from the catwalk. The show had been shown just a couple of days before and there had been a lot of hype around the show, I was very fortunate that so many people were interested in it. So I think from her perspective, that she was the only woman to wear Oscar de la Renta to such a major event was kind of a nice scoop for her. We did sign an exclusivity agreement with Sienna, it was a request that came from Kate Young, her stylist, who said, ‘You know, we really want to wear something from Oscar but we’d like to be the only one.’ Which I think was a nice way to do it.”

He added: “I’ve always admired Sienna, I think she has great style. What I think is good is that, to an extent, she’s slightly reinventing herself. I think she wants to put some of that boho chic behind her. I think that’s what appealed to her about Oscar de la Renta, it was something more sophisticated.”

Sophisticated: A word that certainly came to mind when scanning the crowd of Upper East Side socials, many of whom were wearing Oscar de la Renta gowns. There was Jamee Gregory, in a pink floral frock from the label’s current season. “I’m treasuring this forever because it’s probably the last Oscar that was made by Oscar,” she said. And Marina Rust, in a floor-length green number from “three seasons ago…I think. For me, it doesn’t matter what season it is, it’s Oscar. I keep them forever,” she said. Meanwhile, Eliza Bolen, stepdaughter of the late designer and the company’s vice president, wore a dress from Copping’s first collection for the house. “Forward, always forward,” she said.

Inside the ballroom, Mark Gilbertson, cochair of the museum’s Director’s Council, took to the microphone, noting that the event raised $610,000. “I’d also like to mention that we have in our midst Peter Copping, the new creative director of Oscar de la Renta. And, from what I hear, fashion week’s toast of the town.”

He may very well be. But, at least for now, Copping’s personal brand of toasting and schmoozing is on a quieter scale.

“I really like observing people,” he said. “So, that’s what I’ll be most interested to do [tonight], just look and talk to people, and see what they’re wearing. It’s major research.”