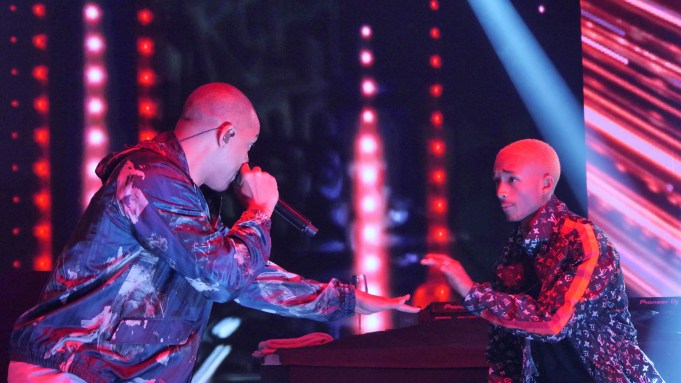 AT THE COURT OF LOUIS: Louis Vuitton conjured a galaxy of celebrities to celebrate the opening of its new flagship on Place Vendôme in Paris on Monday night.

Among the boldface names attending the cocktail at the boutique, followed by a dinner at the nearby Ritz hotel and a concert by Will Smith and his son Jaden, were Cate Blanchett, Julianne Moore, Ruth Negga, Michelle Williams, Alicia Vikander, Laura Harrier, Fan Bingbing, Rila Fukushima and Léa Seydoux.

Before jumping on stage, Jaden Smith — who features in Vuitton’s fall ads alongside Riley Keough, another guest — said he was in town promoting his own fashion label, MSFTS.

“I did a meet-up. I’m selling some one-of-one pieces at a store called iLook — it’s a concept store. So I hand-sewed some pieces and I’m selling them there,” he said. “I make pants and denim jackets, I just add accessories onto them. I stitch them on. I have a sewing machine, I have a Juki in my room right now.”

Jennifer Connelly and her husband, Paul Bettany, were among the guests taking in the sight of the floodlit Vendôme Column from the women’s department on the store’s second floor.

“The view is spectacular — it couldn’t be more beautiful,” said Connelly, who was hoping to squeeze in some shopping during her Paris stay. “This is a beautiful place to come. I was thinking of coming myself tomorrow to have a look.”

Catherine Deneuve, meanwhile, sipped a glass of Champagne in front of a display of handbags from Vuitton’s collaboration with Jeff Koons. “It’s absolutely magnificent,” she said of the store. “The light is beautiful and it’s sparkling.”

Jason Basmajian, chief creative officer of men’s wear brand Cerruti, said the arrival of the flagship in one of the French capital’s most iconic locations was good news for everyone.

“This is such a bold statement about Paris, and about luxury, and a commitment to craft and luxury and fashion, that it benefits all brands,” he said. “It really reaffirms Paris as a place where people want to come for the finest products.”