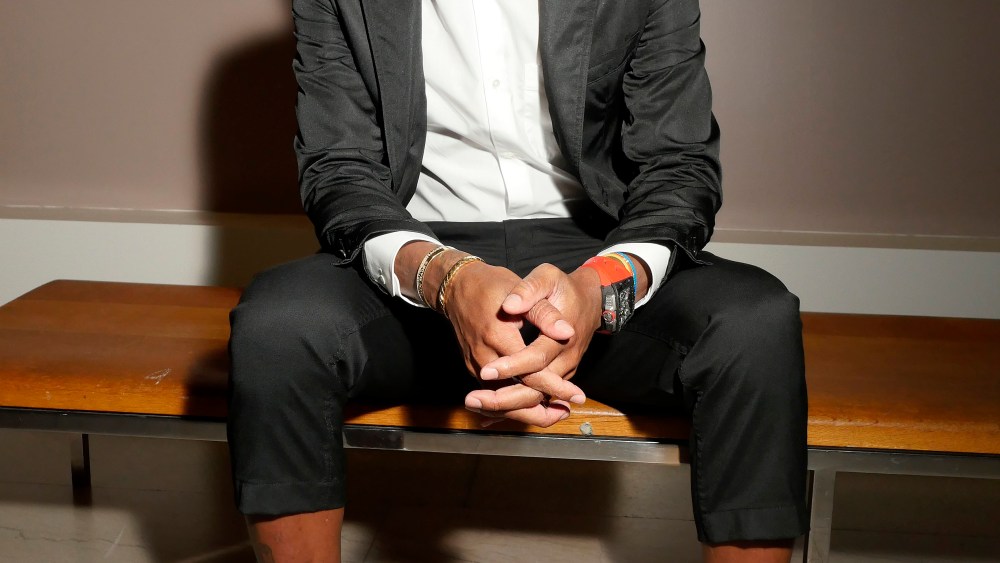 For Pharrell, every moment of his work, life and being is defined by feeling. Each idea he comes up with, all the opportunities he’s presented for collaborations and projects, must feel right.

“Everything,” he said. “Everything is led by emotion.”

Pharrell was at the Brooklyn Museum, sitting in a quiet, secluded wing on the third floor adjacent to the ballroom, where his Yellow Ball, a Monday night event he organized with American Express, took place. He shifted in his seat and looked down at his Doc Marten shoes and white tube socks that coordinated with the full tuxedo he wore, appropriate for the black-tie auction, dinner and concert that took place as part of the evening benefiting Young Audiences Arts for Learning. The organization seeks to widen arts-in-education policies and opportunities for schools and community centers in the U.S. Missy Elliott performed, as did A$AP Ferg; Pharrell noted Ferg is a young artist he admires.

Ariana Grande, whose new album “Sweetener” Pharrell worked on, is another one of those special young artists, he said. When creating the record, they talked about many things, but for the song “Get Well Soon,” in particular, a serious conversation occurred about the bombing that happened in May 2017 at Grande’s concert in Manchester, England.

“That was a moment where she was so crushed from everything that happened [in Manchester],” Pharrell said. “She was carrying it; it was weighing on her. I felt like if we made a song that was about her being there for someone else, then it would get her mind off of being hurt. Or at least help. I was like, man, how do we make that, mixed with a Hallmark card of a song?”

“Mac Miller really loved music. But he loved music his way. Now, that sounds general, but if you know him and you know his music, there were some very specific choices, things that lit him up,” Pharrell says. “He was this guy out of Pittsburgh who loved doing what he did.”

Pharrell then had to go — his hosting duties called. But he spent the rest of the night as a presence, greeting guests; watching David Blaine, commissioned for the evening’s entertainment, do magic tricks (Pharrell’s reactions to Blaine’s card tricks were almost more entertaining than the tricks themselves — almost) and going positively stupid to Missy Elliott’s performance of their track “WTF (Where They From).”

For A$AP Ferg — who has become a fixture on the fashion scene in New York and in Paris — Pharrell’s staying power is what separates him from other artists.

“You know how some people just fade? Their superstardom fades once you meet them, because they become human?” Ferg asked. “He’s still not human to me. For him to have a run as long as he got, like come on, from Nelly ‘Hot in Herre,’ Mystikal, all the way to now? Like, how?”

Blaine followed Pharrell around, perhaps feeling his energy and wanting to keep flooring him with tricks. His pièce de résistance at the end of the night: the signature “Human Aquarium” trick, in which he drank a full glass of water, then burped up a frog that’d been chilling out in his internal organs for who knows how long.

“He’s doing it, he’s doing it!” one guest cried out. Screams and yelps followed immediately thereafter, and camera flashes went off with blinding rapidity. Blaine walked away with a casual gait, like he’d just sneezed. Everyone walked behind him, waiting for the next part of his show. They just wanted to feel mesmerized.