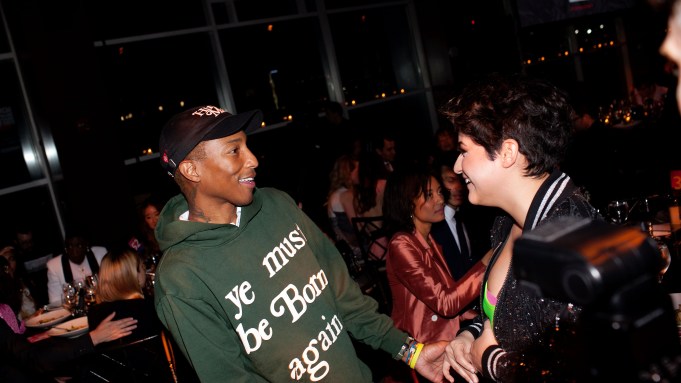 “Could you imagine every seed that trees leave behind?” said Pharrell, shortly after walking into the Parsons School of Design benefit at Pier Sixty Monday night. “If Mother Nature made the decision for the seed-bearing trees to no longer bear seeds, if we’d have those trees?”

It was a metaphorical response to a question about the importance of giving back, a concept that was pivotal to the recent creation of his Something in the Water music festival in his hometown of Virginia Beach, and which the creative multihyphenate touched upon over the weekend in his commencement speech for the University of Virginia; on Sunday, billionaire Robert K. Smith doubled down on the idea and pledged to pay off the student loans for Morehouse College’s class of 2019. If there’s something in the water, keep it coming.

The metaphors didn’t stop with trees, though. The dress code was “creative black tie,” and Pharrell showed up wearing a green hoodie bearing a phrase plucked from the Bible: “Ye must be born again.”

Pharrell had more to say later in the evening, but first: dinner.

Afterward, Lydia Fenet (Christie’s managing director and global head of strategic partnerships) auctioned off a behind-the-scenes experience with Pharrell during an upcoming Adidas photo shoot; the musician threw in dinner for good measure, pushing the final sale price up to $100,000. Maybe his seatmate Brian Donnelly, the artist known as Kaws, who has had his fair share of auction good fortune lately, was the lucky charm he needed.

“I’m happy to be here honoring someone who I’ve gotten to know over the years and who has been extremely creative and inspiring to many people,” said Donnelly, introducing Pharrell to the stage. “He’s just someone who never had boundaries, who’s worked in high fashion and streetwear and sort of mended them seamlessly.”

“My greatest wish is to see students and everyone in this room keep dreaming and creating without means, no boundaries. To open your mind to every idea, to open your work to everyone. To design for all bodies, genders, shapes, colors and abilities,” said Pharrell, before pivoting to a call to action for women’s reproductive rights, arts education, and sustainability.