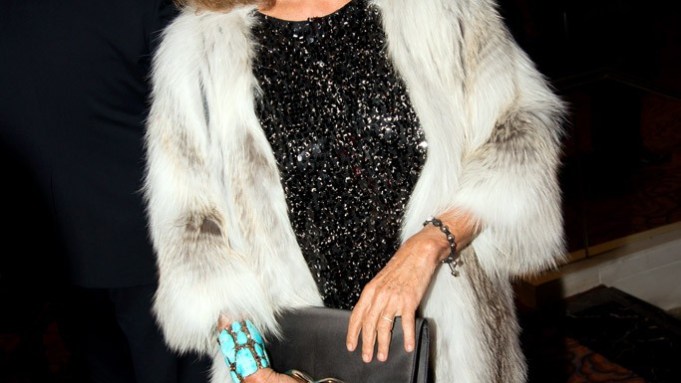 Despite New York’s percolating nor’easter, the fashion set made its way through the blustery conditions Wednesday night to the Mandarin Oriental Hotel for the annual Phoenix House Fashion Awards Dinner, which raised nearly $1 million for the substance abuse recovery charity.

Guests, many of whom breezed in picking snow flurries out of their hair, sipped both the staples — white, red — and more event-friendly beverages — Coke, Diet Coke, Sprite and ginger ale — during cocktails and made conversation about the election.

“I’m so, so happy Obama won,” Francisco Costa said shortly after arriving. “I couldn’t wait to watch it. I ran home right after work, ordered in Chinese food and stayed glued to the television the whole evening.”

A very dapper looking David Neville, who was on hand with Rag & Bone designer partner Marcus Wainwright, reported that he had some captivating company for the evening.

“I actually watched it with Sandra Bernhard, who’s one of my neighbors,” he said. “So there was some pretty entertaining commentary.”

Attendees drifted into the imposing dining room overlooking a snow-blanketed Central Park to be welcomed by Rose Marie Bravo, who temporarily filled in for scheduled emcee, a late arriving Ali Wentworth.

“Ali is lost somewhere in New York, so you’re stuck with me,” she said as guests took to their seats. Bravo gave her opening remarks, noting the evening’s honorees: Jim Gold, Andrew Rosen and Diane von Furstenberg, who, according to her recent W profile and everyone who uttered her name during the course of the evening, now pronounces her name, “DEE-yon.”

When Wentworth eventually arrived she had the crowd roaring with laughter, even if she was admittedly out of her element among the fashion folk.

“He told me how to say his name but I had a drink between now and then,” the emcee said when introducing Olivier Theyskens, who introduced Rosen. “Olivier Taykins? Olivier Thatkins? Can I just say Olivier? I’ve asked a hundred people and everyone’s given me a different thing.”