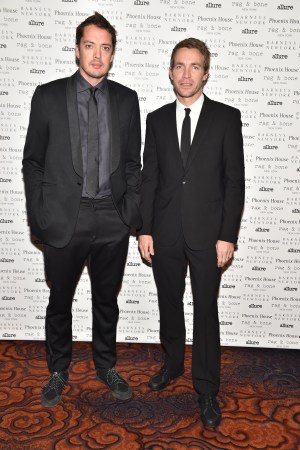 Mark Lee, David Neville and Marcus Wainwright and Linda Wells were honored Wednesday night at Phoenix House’s 2015 Fashion Award Dinner, which was held at the Mandarin Oriental in New York and raised $650,000 for the substance abuse recovery charity.

“Addiction is really one of the diseases of our time and one of the most misunderstood. It’s something I feel very passionate about,” said Lee, chief executive officer of Barneys New York. “If I can do a little bit to help raise some money for such a worthwhile organization then it’s all worth it.”

Andrew Rosen, the ceo of Theory, presented Neville and Wainwright, co-ceos of Rag & Bone, with their awards in a heartfelt speech. “Marcus is a stoic thinker. He’s deeply thoughtful and introspective,” Rosen told the audience. “David is that instantly likable guy for whom everything comes easy. He is always positive and able to find solutions. They are a brilliant pair and their differences are as important to their partnership and their success as their similarities. Their friendship means a lot to me.”

“That almost made me cry,” said Wainwright, the stoic one, before accepting his award with Neville. Since the brand started in 2004, the two have made a home for themselves on award stages — they’ve won an Ecco Domani Fashion Foundation award and two CFDA Awards — but according to Wainwright, it’s still a daunting experience.

“We haven’t received that many awards, but it’s always nice and pretty nerve-racking to be honored.”

Comedian Ali Wentworth presented Allure’s editor in chief Wells with her accolade in a speech laced with one-liners that elicited laughs from the crowd. “I’m Ali Wentworth and I’m here tonight for the goody bags,” she said. But the mood shifted when Wells recalled a recent experience.

“Last week my teenage son didn’t come home from a party,” she said. “He didn’t answer his phone. He didn’t answer texts and, as I sat there, my mind whipped through every possible scenario and none of them were good. From the hours of four until eight, I sensed what some of the parents and teenagers must feel before their sons and daughters find the lifeline that is Phoenix House.”

Wells later revealed that her son fell asleep at a party.