Picture Perfect in Cannes at the amfAR Gala

Guests vie for a flurry of priceless auction items including a chance to star in a short movie directed by Karl Lagerfeld. 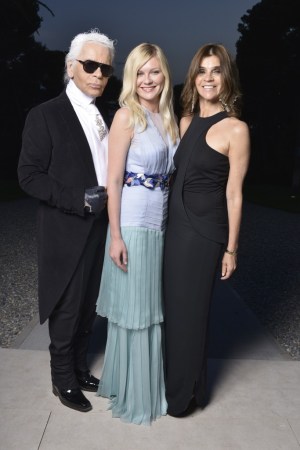 Up for grabs were a personal portrait by Peter Lindbergh; a one-hour private tennis match with the world’s number-one-ranked men’s player, Novak Djokovic, and the opportunity to star in a short movie in Paris directed by Karl Lagerfeld and produced by Harvey Weinstein.

“Don’t be afraid, I have made movies before and everyone is happy and beautiful in my movies,” Lagerfeld assured the audience. His pitch seemed to work, with the lot fetching 350,000 euros, or $440,000 at current exchange rates.

It didn’t stop there. Weinstein took to the stage later in the night to reveal that two of the bidders were angry they’d lost out. He went on to sell a second same film deal for roughly half-a-million euros, or $628,000.

Fresh from walking the red carpet alongside Nicole Kidman for the premiere of “Paperboy” earlier that night, Zac Efron admitted he was a tad jealous, saying: “It would be a dream come true to be directed by Lagerfeld; he’s outstanding.”

The event, held at the Hôtel du Cap-Eden-Roc in Cap d’Antibes, set a new record by raising almost $11 million for AIDS research. Sponsors were Bold Films, L’Oréal Paris and The Weinstein Co., with Chopard, Mercedes-Benz and Quintessentially as co-sponsors. Cash was a theme of the night’s live performances, which included Aloe Blacc, who sang “I Need a Dollar,” and Jessie J, who belted out her hit “Pricetag.” Indie-pop band Fun. performed “We Are Young,” the most downloaded digital single of all time.

The gala also featured a catwalk show of the Perfect Black Wardrobe in the eyes of Carine Roitfeld, featuring 24 black outfits by an array of brands including Pucci, Fendi, Tom Ford, Giambattista Valli and Christopher Kane. Many of the designers were present, as was amfAR chairman Kenneth Cole. Roitfeld tapped a “dream team” of models to parade the looks, including Elise Crombez, Juliet Ingleby, Karolina Kurkova, Lily Donaldson and “American hot girl” Kate Upton, who strutted their stuff to the disco throb of Donna Summer’s “I Feel Love.” The wardrobe was auctioned off as a single lot for 300,000 euros, or $377,000.

“To create a classic dream wardrobe it’s easier to do everything in black, it’s easier to please everyone and it’s one of my favorite colors,” Roitfeld said. Dressed in a black body-conscious Givenchy dress, she drew many admiring glances. Dressed in a red silk organza Pucci dress, Minogue confessed she’d have a hard time sticking to an all-black wardrobe. “I go with the wind, I wish I could refine or define my style but I have too many personalities for one style,” she laughed.

She was still buzzing from the premiere of “Holy Motors” in Cannes, France, the night before, which she described as “one of the most extraordinary experiences of my life.”

Working her way around the tables, Jovovich looked all “Fifth Element” in her sci-fi Versace couture gown. “It doesn’t wrinkle, which is the good part,” said the multitasking talent, who a few days ago released a single on YouTube called “Electric Sky.”

“It’s doing really well. I’m getting ready to release an EP by the end of the summer,” she said.

Louise Bourgoin, who wore a dégradé gray sequin dress by Louis Vuitton accessorized with a “Love Story” book clutch by Olympia Le-Tan, said she would be returning to Cannes in two weeks’ time to shoot “Love Punch” with Pierce Brosnan and Emma Thompson. “I play a gold digger,” she said.

As the night wore on, the glamour factor seemed to matter less. Looking all partied out, Kruger, who wore a ivory Chanel couture gown embroidered with flowers, was spotted heading barefoot to the jam-packed after party, her studded gold Louboutin heels tucked under her arm.