Pigs in a Poke

Monday evening’s BOFFO benefit at HL23, a new building on West 23rd Street and the High Line, had something for nearly every taste. 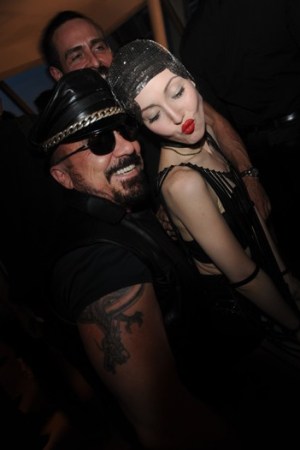 Monday evening’s BOFFO benefit at HL23, a new building on West 23rd Street and the High Line, had something for nearly every taste: farm animals wearing couture, a geisha-dressed master of ceremonies, singing models and free gold for everyone in the form of spray-painted bricks by artist Zena Verda Pesta.

BOFFO, an organization that explores the intersection of architecture and fashion, took over the ninth and 10th floors of the Neil Denari-designed building. Architecture winners of the organization’s BOFFO Building Fashion project, which pairs architects with fashion designers, were revealed at the event. The five architect-designer teams will create rotating pop-up shops at 57 Walker Street in TriBeCa. Each store will operate for two weeks, showcasing an assortment curated by the designer or the designer’s own work.

“It’s nice of you to include the underdog. Is Nicola Formichetti here?” Ladyfag said, referring to the creative director for Lady Gaga and Thierry Mugler. “We’re here to bring you the most hated genre on earth — model/rock star,” she continued. Indeed, several of those blessed with both looks and talent took to the stage in the center of the room, including Ryan Koning, who looked like he stepped out of an Abercrombie & Fitch catalogue, and Kate Nauta, who is represented by Elite.

“Don’t you think this is a good thing, combining architecture and fashion?” said Peter Marino, the guest of honor. “It’s nice that the kids realize what I did — [I’m] the dude who really made fashion and architecture come together. I was really happy to get recognized for that.”

“Every night we’re going to have surprise parties,” said Formichetti, whose collaboration with Gage Clemenceau Architects will bow on Sept. 9. “We’ll have Mugler and Gaga pieces. It will be like a museum, but you’ll be able to touch. I may do a sale for a charity. I’m also doing projects with Uniqlo for Save Japan and Viva MAC. I’ll have specially designed little panda bears and lots of Japanese toys.” Formichetti revealed that he’ll be flying 12 young Chinese designers to New York, where he plans to introduce them to buyers.