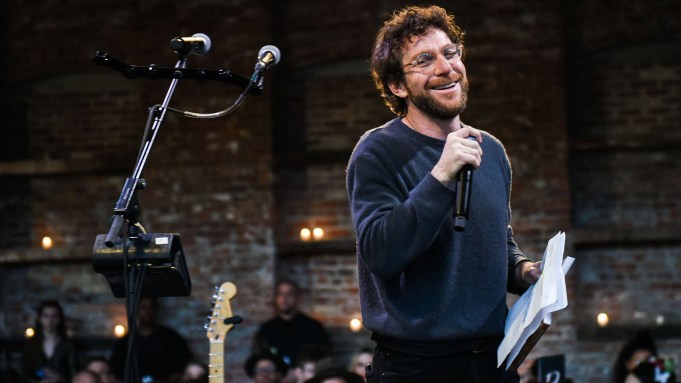 At the Pioneer Works benefit on Sunday evening, Ellie Goulding, Lauren Santo Domingo, Maggie Gyllenhaal and Alexa Chung whetted their celebratory appetites — just an evening ahead of the Met Gala.

As such, the event drew discussion about the privatization of arts support in the Trump era. The morning following the event, the American people woke up to a surprise bipartisan federal budget draft, which flouts Trumpian rhetoric about cutting funding to the arts — saving many public organizations in the process. The Corporation for Public Broadcasting, The National Endowment for the Arts, and the National Endowment for the Humanities were promised new funding for the 2017 fiscal year — with the latter two organizations each receiving a $2 million bump over last year.

Still, the arts community is armed and ready for the possibility of cuts, should this draft not pass the Senate when it goes to a vote on Wednesday or funding not be included in future spending budgets. The President’s rhetoric about cuts to art funding has drummed up anxiety and a call-to-action by many in the arts community.

“We cannot give credit to Donald Trump for the privatization of supporting our nonprofit organizations including cultural organizations, but we will have to rely more heavily on public support if he gets his way in the current budget scenario,” said Brooklyn Museum director Anne Pasternak.

“I mean, we are going to have to subsidize the arts as a culture and community in a way we didn’t have to when the government was putting some of its funds there, so yeah — this kind of thing is more important than ever,” said Gyllenhaal, hours before the bipartisan proposal was unveiled.

“I was at the New York Free Arts benefit the other day — I think it’s our responsibility not just in the arts but in everything to use as much time as we can possibly find to support things that are important to us,” Gyllenhaal added.

“It’s very important to do these [events] to amplify and highlight our mission here and bring together different communities of scientists and artists and musicians and cultural programmers to try to change the paradigm of education and cultural production and community building. In this time, in this political climate, it’s even more important to make places as opposed to virtual environments,” Yellin said of the evening’s importance.

“We constantly shift, we constantly evolve — we are now analyzing everything from the MIT Media Lab, The Cooper Union, the Bauhaus to try to learn from models that precede this one. We’re thinking about how you can build a new model to augment the university system, make education available to everyone and come together from all different disciplines to build community,” Yellin said of Pioneer Works’ evolving mission in the aftermath of Trump’s election.

Added astrophysicist and Pioneer Works science director Janna Levin: “I think that, right now, we are not even look at traditional funding — we don’t even consider it. We have private funders, also wonderful foundations that are exploring and open to new programs that didn’t exist.

“I want to build an observatory in the garden with an antique telescope. A telescope enthusiast is donating an antique telescope and refurbishing it — it’s [more than] 100 years old and has a legacy and a history. We are going to build an old-fashioned telescopic dome with support from private funders who are so thrilled about the fact that this would be the first public observatory, ever, in New York City,” Levin continued. “We can do it right on the ground here. These kinds of things I’ll probably be able to do within one and a half years, two years. If I was going through the traditional route, it would never happen.”