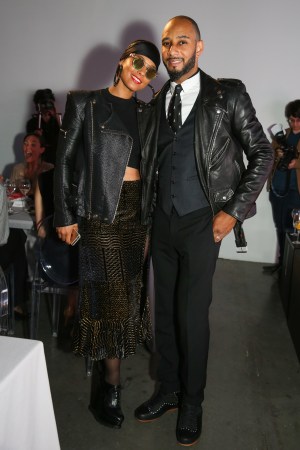 Partygoers roamed all three floors of the 27,000-square-foot warehouse-turned-community center, eyeing a number of happenings including a Stella rooftop bar and Bombay Sapphire Tiki Lounge; tarot card readings; tintype portraits by Rowan Hasty and virtual reality “Tilt Brush” stations presented by Google, where participants could paint, sketch and sculpt in 3-D. Over dinner, jazz singer Esperanza Spalding belted out a soulful, impromptu performance, shrugging it off with nonchalance. “I mean, usually I have a band, so that was a little strange, but it’s cool,” she said. Elsewhere, Gyllenhaal said she’s gearing up to shoot her new HBO show, “The Deuce,” a Seventies-Eighties porn drama set in Times Square in which she’ll play a sex worker.

After a flurry of thank yous, Yellin made a case for climate awareness during a speech to the crowd. “We are going to be under water where we are sitting in the next fifty years,” he said, then going on to comment on the current political climate. “Humanity can fix everything — our species can make energy for the entire planet of eight billion people, we can build the bridges, we can create new cities, we can do everything. But the only thing that we can’t do lately is get along….If we could realize that our differences are our potential, then maybe, just maybe, we’ll move a city to the left, and we’ll build a wall to stop the ocean, and we’ll make free energy for everybody. A place like [Pioneer Works] is here to re-engineer public space, to rethink education and to bring people together to think about everything differently.”

Monica Lewinsky, who made it to Pioneer Works last February for Rachel Comey’s fall 2015 show, said she and Yellin became unlikely pals after giving TED talks together last year. (Lewinsky’s talk, “The Price of Shame,” centered around cyber-bullying; Yellin’s talk shared his journey as an artist). “I’m a huge fan of Pioneer Works,” she said, clad in leather pants and a spotted sweater that read “Inter Galactica.” Though she didn’t bid on any art available through the evening’s silent Paddle8 auction, she had put together a wish list. “There are quite a few I love…Cindy Sherman’s, Marina Abramovic’s, and Dustin’s…How big is my bag?”

Swizz Beatz beat Lewinsky to the punch by scooping up Yellin’s piece, “Psychogeography Study, The Girl With The Sandwich,” for $80,000 during the live auction — the highest bid of the night. “Dustin is a free spirit like myself. We both share the same goals of contributing to the arts and culture,” said Swizz. “I was a fan of his work, and then when I came to see his studio, I saw that it wasn’t just a studio — it was an enterprise…He came into my world as well, and we’ve been just connected at the hip since then. As artists, we have to help each other.”