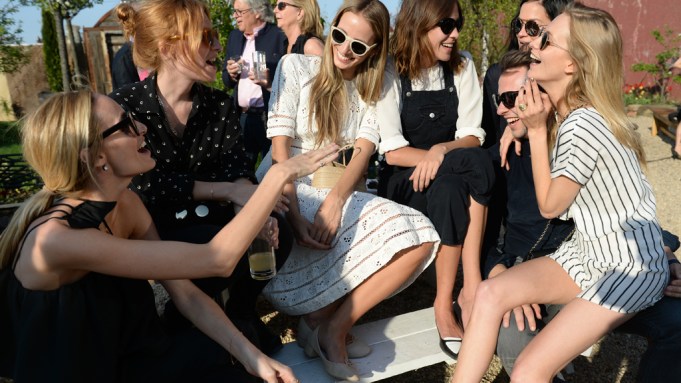 “My brain is a bubble that lives in a pineapple, and I have a banana in my beard,” Dustin Yellin said on Sunday night. The eccentric artist was asked about founding and transforming Pioneer Works from a reclaimed former iron factory in Red Hook, Brooklyn, into an arts, education and cultural hub over the past four years.

“It’s all about bringing people together who think differently so they can think differently together about the world,” Yellin continued, getting a little more cogent. “It’s about getting this school to be born, it’s about publishing a book every quarter.”

The event also marked another, slightly less official occasion: Poppy Delevingne’s 29th birthday celebration, signified by birthday cake-themed Oreo cookies strewn across one of the picnic tables. The model had momentarily lost her Chanel bag but then recovered it, celebrating with a happy dance.

“I actually DJ’d here a couple of weeks ago,” Solange Knowles, a vision in a lime look from Rosie Assoulin’s fall collection, said. “I’m doing a project for Kiehl’s, and we hosted a party here. It’s good to be back.”

Alexander Gilkes, cofounder of Paddle8, conducted a live auction during dinner, which was set throughout the center’s various levels, some tables housed inside resident artist’s studios. Over in studio four, Wes Gordon was surveying an artist’s photographs, a series of provocative nude tintypes. “That’s one way to break the ice,” he said. Nearby, guests could get their tintype portraits taken for a cool $250 donation, though other activities — like fake tattoos and tarot card readings — were free.

Post-dinner, guests returned to the outdoor garden area, where Lucy Liu was seen emerging from one of the yard’s reclaimed dumpsters, recently remodeled into a fully functional mid-century kitchen. A reclaimed airstream trailer also proved a popular setting for Instagram photoshoots. Liu lamented that she was wearing stiletto heels, which were sinking into the garden’s pebble and dirt floor. “I was too curious to not check out all the trailers, though,” she said. “It’s my first introduction to the space and to what they offer to all of their artists. It’s a really a wonderful community.”

There were whispers all night of a surprise performance by Swizz Beatz, who made his entrance to the party at 11 p.m. but never actually got on stage. “I just got off the plane,” he said. He just flew in from Las Vegas, where he had performed at Jay Z’s bash there after the Floyd Mayweather and Manny Pacquiao match. “Dustin is my big brother,” he added, before making a beeline for a taco truck, which had parked in the yard just in time for late-arriving guests.