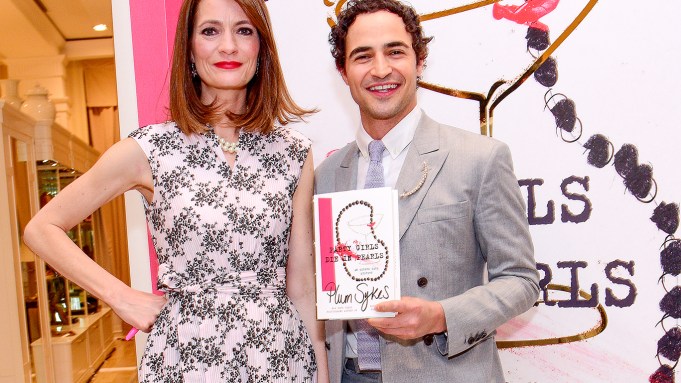 It should come as no surprise that Plum Sykes arrived for her book tour launch in a double strand of pearls.

“It’s definitely [intentional],” she said — after all, her book is titled “Party Girls Die in Pearls” —  “but these are Brooks Brothers pearls. They’re not real.”

Sykes was hosted by Brooks Brothers’ Zac Posen, an old friend, for the first party of her book tour, which will take her across the U.S. and back to London. “I’m going to eight cities and doing parties with Burberry in all the other cities — Houston, Dallas, Chicago, San Francisco, L.A. — all with Burberry, and then Chanel in the U.K.,” Sykes said, as friends — and her blue lipstick-wearing twin sister Lucy — popped up to give hugs.

“I have so many memories of Plum. I was studying in London at Saint Martins, and I moved back to New York in the summer and that’s when the beginnings of my career were starting,” Posen said. “She was there in the studio at the beginnings, when it was in my parents’ living room. She was an early supporter, covering for Vogue, and I was at her wedding.”

The book is Sykes’ first in a decade and is a murder mystery set at Oxford University.

“You do readings and appearances and signing, you do as much as you can. But the other thing is, compared with when I had my first book, the landscape has changed so much because it’s all about social media,” Sykes said. “It was a real shock. Today we did a Facebook Live, loads of Instagram, loads of Instagram Stories, you just have to do as much of that as you possibly can.

“I love doing Instagram, that’s the one I like the most. And I think it’s the most fashion-y one. And also, my kind of readers are young women, and are on Instagram. A lot of them contact me on Instagram — they say, ‘I love your book,’ ‘When’s the next one coming out,’ ‘Where are you going to be,’ you can actually speak to them!”

And when she speaks to them, her message is appropriately on-brand for modern-day young women. “I suppose my message, and it’s not an overt message, but underlying, is to be your own person,” she said. “And to be a strong woman and work, have a career.”

Dial O for Murder: Plum Sykes Goes Back in Time to Oxford in New Novel