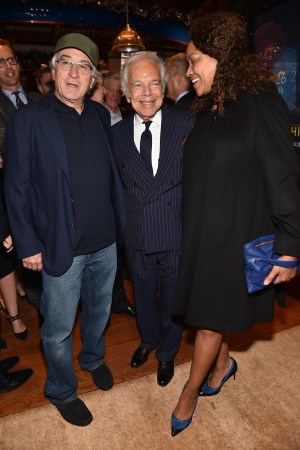 It’s officially the season for shopping, and with that, the season to shop for a good cause. On Tuesday night, Polo Ralph Lauren hosted an evening inside its Fifth Avenue flagship to benefit the nonprofit Athlete Ally, focused on LGBT equality in the athletic community. Lauren certainly knows how to draw a crowd: in attendance was Robert De Niro, Uma Thurman, Alan Cumming, Colton Haynes, Paul Haggis, Sandy Brant, Wendi Deng Murdoch and, perhaps most curiously, Monica Lewinsky (who seems to be upping her social game in the past few months). The evening also drew Harley Viera-Newton (parked at the DJ booth), members of the host committee including Cameron Winklevoss and Tyler Winklevoss, and the requisite dash of all-Americanly handsome male models (e.g., Tyson Beckford and Cory Bond).

“Right now, all over this country, we still have LGBT people who are being discriminated against,” said Christine Quinn, Athlete Ally board member and former speaker of the New York City Council. “And although we can get married, there are many many states where you can get married on Saturday, and go to work on Monday, and get fired because you got married on Saturday.”

The event was timely, as that night in Houston, where a similar P0lo and Athlete Ally event is scheduled to take place on Nov. 12, a vote was up on the Houston Equal Rights Ordinance, which would’ve secured nondiscrimination protection to LGBT people. It was ultimately rejected.

In addition to some early holiday shopping — Quinn advertised the gifting value of the brand’s cable knits — the big seller of the night was a black Polo Sport baseball hat, all proceeds of which went to Athlete Ally. Ten percent from all the other sales that night went to the five-year-old organization.

“If we are serious about ending all forms of discrimination, and ending anti-LGBT bullying and discrimination, then it cannot just be the responsibility of those who are impacted by oppression who shoulder the responsibility of ending it,” said Hudson Taylor, founder of Athlete Ally and former All-American wrestler at the University of Maryland. Taylor first spoke out as an ally by wearing a sticker during a wrestling match, and afterward he received more than 200 e-mails from closeted athletes thanking him. “If a wrestler could get 200 e-mails from wearing a sticker,” Taylor said,  “imagine if I had been a football player.”