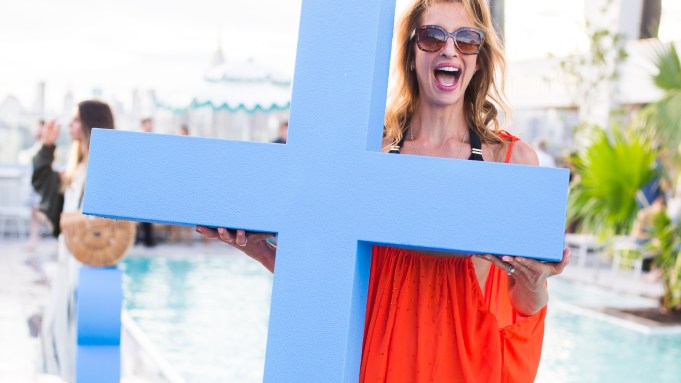 The William Vale Hotel is making a splash in Williamsburg, Brooklyn. The newly opened luxury stop boasts the largest outdoor hotel swimming pool in New York City — 60 feet — and on Wednesday night it played host to its first pool party.

The social nonprofit +Pool hosted its second annual summer pool party to raise awareness and support for its projects. The organization is building an outdoor floating pool that will filter New York City’s water, restoring 600,000 gallons of river water every day and providing a safe space for the city’s residents to swim in the water surrounding the city. +Pool will also provide swim safety instruction for youth and promote STEM education in schools. The project will announce its location this fall, which is rumored to be somewhere in the downtown vicinity.

A mix of artists, designers and architects came out to support the event, including Lauren Bush Lauren and David Lauren, who stopped to inspect the gift bag on their way out; New Museum‘s Karen Wong; Emily Weiss; Alysia Reiner; Jamie Chung; Mike Perry; Sloane Crosley, and Marc Kushner. The party was sponsored by Ann Inc.’s clothing label Lou & Grey and Lavazza.

“I got involved super early in the process, and I became obsessed immediately as a huge environmentalist,” said Reiner, whose daughter was the first person to jump in the hotel pool’s water following a synchronized swimming performance by The Brooklyn Peaches. “[The project] creates both environmentalism, education and community, and face-to-face communication with other human beings. I feel every city should have a plus pool,” she continued. “I think clean water is such a deep part of our future — I truly think that water will be more precious than gold or oil in our future.