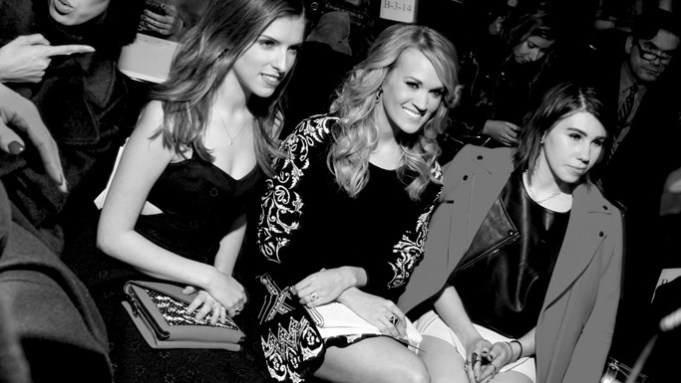 Ready to capture the fashionistas in all their “Pop Shot” glory, I excitedly walked across Central Park from easy to west. Expecting the previous day’s winter wonderland, I was instead greeted with black ice! Not wanting to end up with a fashion accessory made out of plaster, I carefully traversed the terrain.

Once inside the Lincoln Center tents however,  the travails continued.  Running late and trying to find signage directing me to BCBG Max Azria,  I instead experienced a dark rathskeller (courtesy of Beck’s Sapphire beer) and a winding, confusing passageway with what looked like black garbage bag walls. Perhaps this anti-fashion aesthetic explains the mass exodus reflected in the growing number of offsite shows since Fashion Week’s acquisition by William Morris Endeavor.  Perhaps the IMG members that were brought back last minute can quickly throw some white wash on the vinyl and post signs to the egress.

At the Nipponista pop-up launch, Joe Jonas seemed enthralled  with everything Japanese…well almost.

Enjoying the fashion warm-up event, before the next days’ plethora of men’s wear shows, Jonas expressed adoration for the designer Kansai Yamamoto who was on hand with his artistry.  Bopping around the store-cum-art installation, Jonas gravitated to a robotic doll whose iPhone face records the onlooker. The singer couldn’t help snapping back a pic of his own visage recorded on the doll which echoed anime in it’s gyrations.

Jonas, a self-professed sake aficionado wasn’t as impressed with the liquid shots being offered, but confessed to me that in true Japanese fashion,  he would never refuse a sip of the fermented rice liquor.  I’m not sure if I’m “Turning Japanese” like Jonas or just anticipating the trek to the Alexander Wang show at the Brooklyn Navy Yard, but I sure know the feeling!