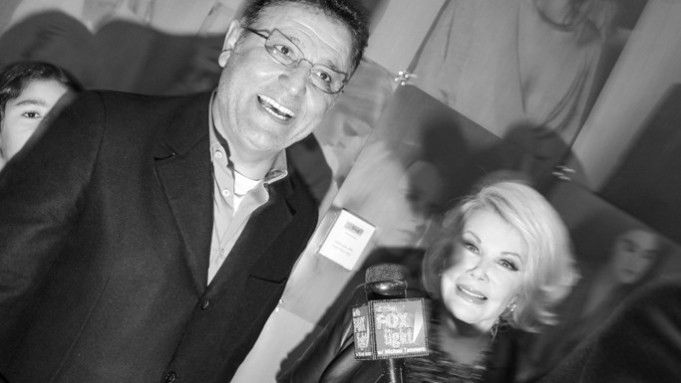 It was barely 10 a.m., and my fashion week started like the Macy’s Day Parade and Oscar red carpet all rolled into one. At the Elie Tahari Day Reception celebrating his 40th Anniversary, the Fort Hamilton High School Marching Band played with full force as Joan Rivers hurled profanities.

Mayoral declarations of fashion valor and one-liners were exchanged in the midst of Tahari’s only-in-New York tale of schmattas to riches.

Ladies who Lunched included the rockin’ mother-daughter team Patti Hansen and Alexandra Richards.  Hillary Swank was also in attendance showing off her toothy grin while seated in-between the man of the hour and Iman. Safe to say there were no profanities shared at that particular table.

Although A-lister Rhianna seemed to be a no show for her costume designer Adam Selman’s debut, the designer’s bestie Amy Sedaris was on hand for all kinds of support. Before the start of the presentation, the “Strangers with Candy” star was busy handing out red velvet cake bon bons to her gal pals waiting outside. Once the retro photo shoot themed display started, the comedienne manicly played the roll of photographer, shooting the Seventies-inspired looks, while real photographers cat called her to “work it!”

Those blue for rubbernecking with celebs at the now on hiatus Fashion’s Night Out, found themselves at Target’s shop-till-you-drop event celebrating their launch of a 3.1 Phillip Lim collection for the masses.

Jessica Alba represented the A-list, posing with racks of clothes while guests clicked away on their iPhones.  The week has only begun, so stay tuned to see what I’ll be snapping up while on the prowl to get this season’s most fashionable POP SHOTS!