The throngs were in attendance at this year's Fashion's Night Out. 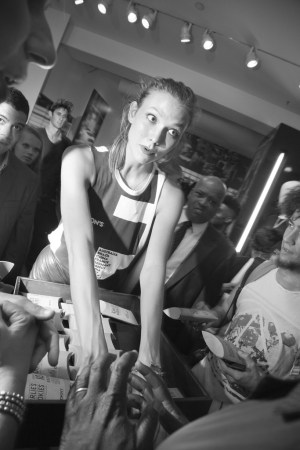 The throngs were in attendance at this year’s Fashion’s Night Out. Prince Street was pedestrians only as fashionistas mixed with revelers just looking for an excuse to party. At DKNY Soho, Karlie Kloss was FEEDing guests her own batch of vegan cookies designed to delight the taste buds and at the same time raise donations for the charity. Around the corner, Alessandra Ambrosio happily posed for her Victoria’s Secret fans at a pop-up photo studio inside the store. But don’t be fooled by all the fun, FNO is hard work. Upon my arrival to grab a picture of Alessandra, I was told that the fully clothed model was “on her break”. Nice work if you can get it!

The night before while President Bill Clinton spoke in Charlotte, less democratic parties were on hand kicking off New York Fashion Week. Heidi Klum blew off “Project Runway’s” Season 10 Wrap Party at Lord & Taylor to attend a decidedly more swank celebration at The Four Seasons in honor of designer Brian Atwood. The Hilton sisters were also on hand and seemed to be campaigning for some position or another. Upon their exit, the duo strategically walked up 52nd Street, an entire half block toward Park Avenue, posing on the go as the paps happily snapped. No speeches were necessary.