On Saturday, I entered the Prabal Gurung show at Pier 57 and was ushered into the pitch black photographers' entrance. 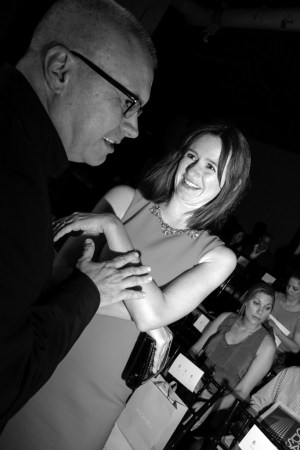 On Saturday, I entered the Prabal Gurung show at Pier 57 and was ushered into the photographers’ entrance.

Pitch dark, I walked gingerly through a long corridor, barely avoiding a variety of electrical cords and a ladder wielding crew member.

Just as I saw a bit of light toward the seating, I abruptly fell into a sizable hole in the floor; half my body dropped with a thud.

Although it wasn’t nearly as serious as when Hillary Alexander was hit by a runway light, I was bruised, cut, and shaken.

In need of assistance, I found myself alone in the dark. Picking myself up, crew members ignored me but immediately covered the gape in the ground with a large sheet of wood.

No bouquets or sympathies were received as when Bill Cunningham was knocked off his bike. I didn’t even receive a gasp as when Carrie Bradshaw fell on the runway and became fashion roadkill. Not able to find a first-aid kit and not wanting to miss my Pop Shot, I channeled my pain into snapping Kate Bosworth seated next to Andy Cohen in the front row.

Taking my bruises (physical and egoic) and licking my wounds, I headed to the Edun show at Moynihan Station.

No holes at this venue! Even the leader singer of the band Hole, Courtney Love, was a no-show. And there was plenty of sun streaming in from the abundant skylights. It was so bright in fact that Alicia Keys kept her sunglasses on and tried to shield her visage away from the glare, in order to procure a more flattering photo op.

I already loved that Edun works toward growing trade in Africa and helps apple farms in New York State, but a safe work environment for proletariat photographers seems like Eden to me!