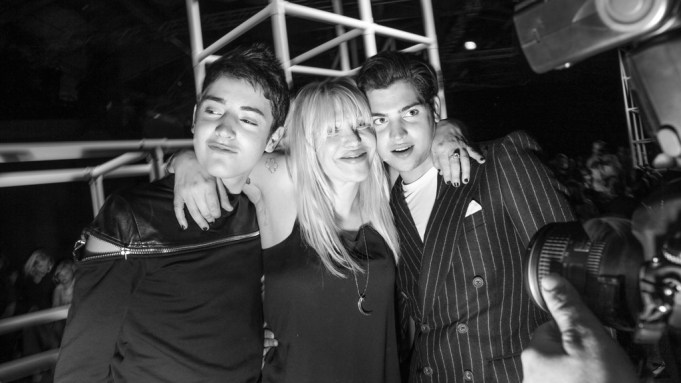 Multitudes of street style photographers have been doing their thing, just about everywhere since the start of fashion week.

They travel in packs and like rabid dogs are likely to pounce on whatever scrap of meat comes their way.

There are more of them outside of the Moynihan Station venue then on many a runway riser.

Since not making the cut for Vanity Fair’s International Best Dressed List (the party, as well as the actual list), I thought I might have better luck getting myself into one of the street fashion blogs.

Trying to lure their attention, I murmur under my breath “street stylin,'” hoping the subliminal call might do the trick.

My advances are usually met with being ignored, but on one occasion, a trio hailing from Asia bellied a loud, gregarious chuckle. I guess my five-season old Diesel long sleeve and my 2012 Adidas Dragon sneakers won’t make the pages in Seoul after all.

Aggression seemed to be the inspiration for several designers this season.

Prabal Gurung’s runway seemed like a scene out of ‘Psycho’ with large white bathroom tiles and opaque shower curtains lining the runway.

At DKNY, bright lights blazed while guests were seated. Kelly Osbourne was not amused, however, as beads of sweat appeared on her caked-on alabaster façade while flashbulbs snapped up her image.

Thakoon, and Hood by Air implemented epileptic-inducing flashing lights while Y-3 had black garbage bag lined walls and had six drum kits ready to for effect.

Right before the Y-3 show was about to take place however, Justin Bieber snuck inside the darkened room and posed for a quick three-Mississippis for those photographers privy to his last minute entrance. If you missed it, you missed it as his security did not allow anything more than that that all too brief photo-op.

Later that day, on the runway for Opening Ceremony, I found myself faced with the same uncooperative teen sensation.

Posing with his “Beliebers” who took fan-snaps on their iPhones, his posse of security were rough on press photographers who were told NO.

Perhaps a bit harsh, I half-heartedly thought while waiting for the show to let out and the after-party to begin. Perhaps I just needed to “Believe” and I could get the perfect POP SHOT.

Just then, the Biebs appeared to greet his fans. Mingling into the crowd, I was able to get my bone after all! Woof! Woof!!