The wow factor continued to kick into high gear with David Beckham in the front row at Y-3. 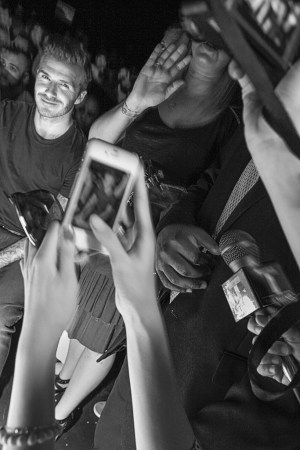 Flashbulbs were blinding as Sarah Jessica Parker made her way to her seat at the Diane von Furstenberg show.

Protected by  p.r. and security, the “Sex and the City” star saddled up next to DVF’s hubby Barry Diller.

The wow factor continued to kick into high gear with David Beckham in the front row at Y-3.

The tat-wielding soccer star blazed the front row with female fans snapping souvenirs with their iPhones
and male fans wishing they could also “bend it like Beckham”.

Goals continued to be be made Sunday night when Purple Magazine threw an intimate 20th Anniversary Party at the Standard Hotel.

The A-list in attendance included those from the worlds of fashion and art. Carine Roitfeld and host Olivier Zahm held court while  Richard Prince rubbed shoulders with Klaus Biesenbach and Kim Gordon. Edginess was de rigueur and the crowd was rounded out with a few  Hollywood rebels.  Chloë Sevigny and pal Natasha Lyonne were looking their indie best while Adrien Brody, in another area of the room, gave off a sly smile to friends.  Jared Leto, just back from the DNC, talked to me about politics, art and commerce as well as  his soon to be released documentary “Artifact.”  Another type of keepsake, in the form of the party’s collectible Richard Prince designed goodie bag, was quickly grabbed up before the sit down dinner had commenced.  With auction prices for the artist’s work reaching $6.5 million, it’s no wonder social politics goes out the window when art and commerce are involved!

The tail end of #NYFW provided senior moments for at least a couple of fashion icons.