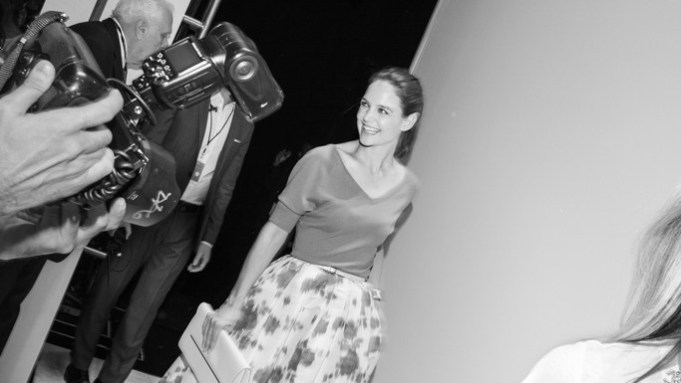 Retro middle-aged Nineties supermodels were the rage at Proenza Schouler. Representing “women of a certain age” on the runway, Kirsty Hume knitted backstage and walked the walk at the show. In the front row, the boys featured some other beauties from back in the day. Amber Valletta was joined by a very late-arriving Linda Evangelista. The supermodel who famously would not “wake up for less than $10,000 a day” looked like she had only just, refusing to remove her sunglasses for my POP SHOT.

In the new ad campaign for Prabal Gurung and sitting front row at his show was Bridget Hall.

She was unrecognizable from an iconic picture I took of the underage teen partying back in her heyday. She now looks more like a suburban soccer mom trying to find time for an hour a week on the elliptical.

Hours before Rachel Zoe was due to unleash her latest collection, the celeb reality star stylist was not amused.

Trying to get in the Studio at Lincoln Center, she faced a security guard who insisted Zoe did not have the proper credential to enter her own fashion show.

White House party crasher Michaele Salahi, accompanied by her fiancé, Journey guitarist Neal Schon, on the other hand, had no problem getting into the venue. Since Zoe’s Bravo TV show has now been canceled, the designer might avoid repeating this problem by asking Salahi for some tips of the trade.

At the Thom Browne women’s show, orderlies in white lab coats were handing out white M&Ms in dosage dispenser cups.

Asking Barneys New York’s Simon Doonan if the show wasn’t just a p.r. ploy for his latest book, “The Asylum,” I received a rather quizzical look.

Doonan claimed he didn’t understand, and I wasn’t sure if he was being coy or just another victim of a fashion week lobotomy.

Not wanting to risk being strapped down and forced to join the multitudes of New York’s sockless men, obvious victims of an experiment gone wrong, I rushed out onto the street with a survivor’s deep sigh of relief.