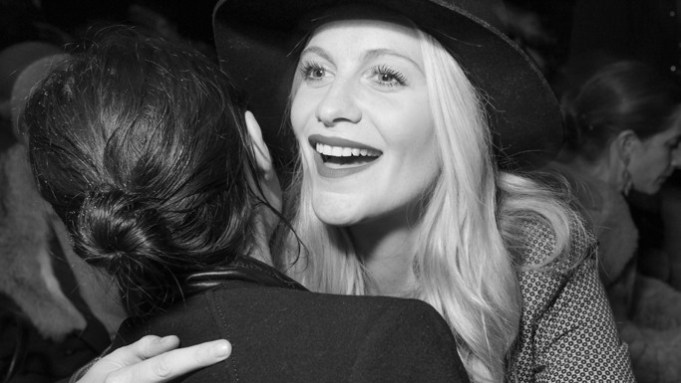 As fashion week started, I found myself in a sour mood. Of course trudging around in the midst of Winter Storm Nemo from tent to off-site venue is enough to make anyone at least slightly cranky. Celebrities staying in L.A. or freezing me out of shots also bring out the complainer in me. Janet Jackson missed a show, amfAR limited this year’s photography access to their gala, and Leonardo DiCaprio attended the CFDA/Vogue Fashion Fund presentation but did not permit pictures.  At the “Project Runway” finale, even Alexa Ray Joel lamented “Why is everyone so hyper?”

As fabric delays and not Nemo bumped Marc Jacobs from a slot Monday night to Thursday, those not able to adjust their skeds were told to calm down and enjoy the live-stream. Although fun for the masses, watching the show from the comfort of one’s laptop somehow lacks the spectacle that helps define the culture of fashion. Indeed, sometimes luddite ways are best. American Express sponsored a coat check in the tents complete with computer check-in. The problem was that the screen would stall and on Friday, the line was at one point 20 minutes long. The old standard of a ticket with your number would have worked so much quicker!
At both Kenneth Cole and Rebecca Minkoff, technology was also being pushed, invitations to tweet were projected on the walls. Innovation for innovation’s sake is starting to get on my nerves…unless it is my POP SHOT picture being retweeted by camera shy @LeoDiCaprio!