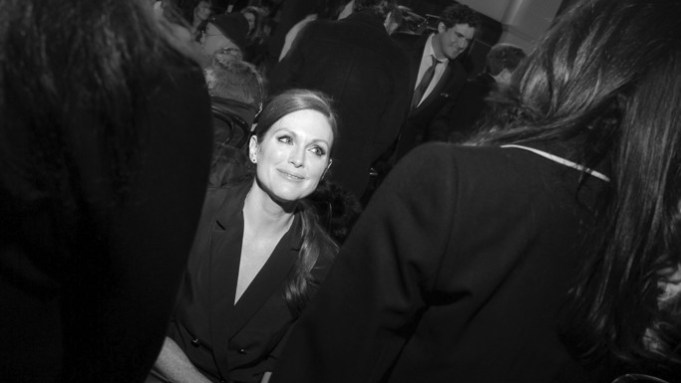 Over the weekend the kids were all right — if a bit delinquent — checking out various off-site venues. Chloë Sevigny for Opening Ceremony hosted a fashion presentation-cum-jam session at St. Mark’s Church in The Bowery. The “Big Love” star left Mormonism to last year’s Republican hopeful and instead embraced a manic rock ’n’ roll revival. Amongst her fashions, various bands played in an alternating circle and took the crowd on a rebellious trip.

Artist Jack Pierson was in attendance and thought it very “badass” that Chloë was standing front and center next to the models.

The style icon also participated in holding up protest signs that included the phrases “I.U.D.,” “Freedom to Have Sex,” and “Goat Pussy,” meant to identify the performers as well as the sexual freedom that the Sixties-inspired clothes were intended to evoke.

Included in the musical mix was Kim Gordon of Sonic Youth fame, who chanted, “Don’t take my freedom away!”

At almost 60, Gordon and her guitar stole the show that was meant to celebrate youth culture of the past. Gordon is a bit of a punk fashionista herself, having previously had her hand in a clothing line designed for hip moms (is she still doing this?)…and that she is!

The following night, fashionable miscreants of all ages headed to the more uppity Upper East Side.

This time around the vice was sugar. Cynthia Rowley had a presentation to celebrate her new venture, a sweet treat called CuRious Candy. Selling confections as well as clothes, the designers’s latest store is located in a slightly hidden two-story brownstone.

Walking through a landscaped outdoor pathway, I felt like Hansel. At the entrance, I was greeted by licorice-flavored cotton candy decorated with colorful offbeat wisps.

When actress Jill Hennessy remarked that she liked the gold powder surrounding my mouth, I had to admit it was from all the fluff I’d been eating and not from being particularly in touch with my feminine side.