At the inaugural presentation for NAHM, designers Nary Manivong and Ally Hilfiger rushed around doing last-minute styling on the models. 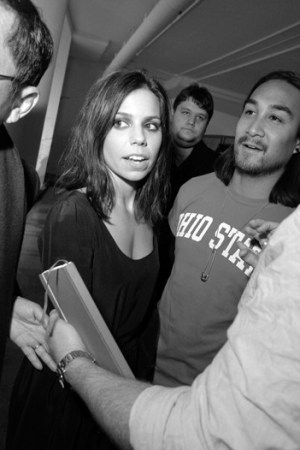 At the inaugural presentation for NAHM, designers Nary Manivong and Ally Hilfiger rushed around doing last-minute styling on the models. When Ally’s Mom suggested that she move one of the side models to stage center, her daughter responded, “No…[pause]. Thank You.”

Instead of professional advice, her famous designer father greeted her with a big hug, at which a verklempt Ally asked if anyone had a tissue.

In the afternoon, Tommy hosted a small show of his men’s collection at The Lion, a restaurant on West 9th street.

Cordial and wearing this spring season’s Anglophiled Hilfiger blazers, the twins agreed to pose underneath a photo of fellow compatriot Mick Jagger.

Backstage at Cynthia Rowley, the designer mom remarked with a wink that the best fashion accessories were her children.

No tantrums there, but at Rag & Bone Erin Wasson interrupted her photo op by jumping up and down and demanding a break for a smoke.

Late night, Patricia Fields hosted the Valentine’s Ball at Capitale. Club kids of all ages were greeted by the nightlife matriarch Susanne Bartsch as well as columnist Michael Musto. More personal style than fashion, the event was full of flesh, face paint and plenty of vogue-ing.