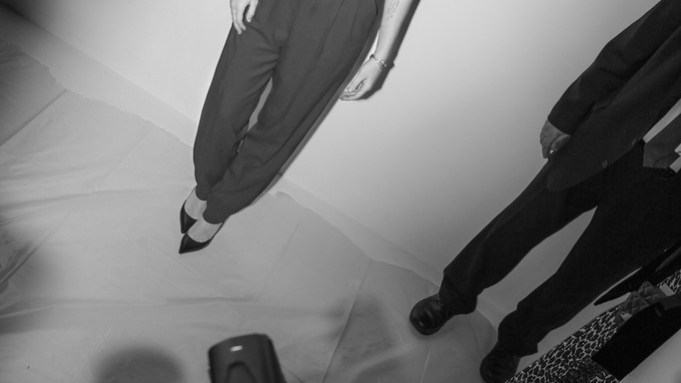 At Thom Browne, pretty male models wearing the designer’s signature high-water hemmed suits were laid out on cots throughout the runway.

The tableau included red fabric tied around wrists and over the eyes. In addition, crowns of thorns were laid atop their heads, seemingly scraping the scalps of the young men.

Waiting for the women’s wear show to begin, house photographer Gerardo Somoza felt a tinge of compassion and adjusted the prickly headgear on a couple of the models.

Comedienne Sandra Bernhard left her usual barbs at home while talking to the press but might have thought the scene painful…in more ways than one.

From pain to passion, the tail end of fashion week brought in some A-list stars, making guests swoon just in time for Valentine’s Day. Matt Damon was a shocker, attending Naeem Khan with his wife.

It was his first runway moment since being a no-show at L.A.M.B. in 2011. Backstage at Michael Kors, Hilary Swank charmed with her smile at the step and repeat.

The scene at Rachel Zoe was less charming, though, with security and p.r. not prepared for the Instagram madness that Miley Cyrus brought with her. At Proenza Schouler, Liv Tyler showed up as photographers were exiting and provided this shutter bugger with only a shot in the dark for true POP SHOT love.