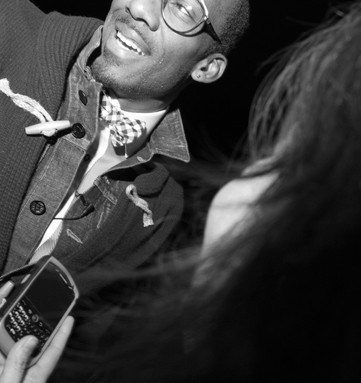 In the front row of Imitation, Chloë Sevigny oogled at Liv Schreiber’s three-year-old son Sasha. When photographed with his father, the tot, who has been known to attack paparazzi on the street, did his best to imitate the shutterbuggers. Eventually having had enough, Sasha moved his hands to cover his eyes, at which Chloë commiserated: “I know that feeling.”

Later in the day at DVF, the show was to be filmed in 3-D.  When asked what he thought about the medium, director Mike Nichols commented that he liked the one with the buildings falling down, meaning “Inception.”

Luckily for the fashionistas,  this time around there were no falling bricks or lights for that matter.

While cabbies honked and buses swerved, a father and son happened to be passing by. The surprised dad exclaimed to his young son, “That’s definitely not for you.” As he pulled the son’s hand forward uptown, he couldn’t help turn his head back and look wistfully at the scene.