Under the tents, at Vera Wang, a faux wrought iron gate stood at the precipice between runway and the creative process found backstage. 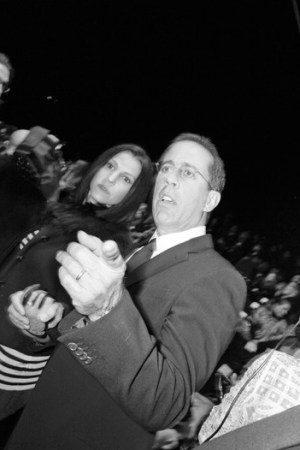 Under the tents, at Vera Wang, a faux wrought iron gate stood at the precipice between runway and the creative process found backstage.

Besides sporting Vera Wang originals while on the ice, the skater is planning his own line and is seeking a retailer.

Shaking hands and taking his own smartphone pics, he revealed that he was leaving for Haiti in the morning.

The Grammy award-winning musician is intent on helping one of the presidential candidates back on the struggling island.

Asked if he still had aspirations for that office, Jean politically offered that his goal was to first help create stability in the government so that the country could function.

Sonia Braga was vamping it up on the preshow runway of Narciso Rodriguez.

Showing off a sultry new coif, the Brazilian actress spoke about the possibility of reprising her role on “Brothers & Sisters.” When asked if she had thought about participating in the “Dynasty” movie that is supposedly in the works, Braga cooed that she would love to play a sexy maid.