The tail end of #NYFW provided senior moments for at least a couple of fashion icons. 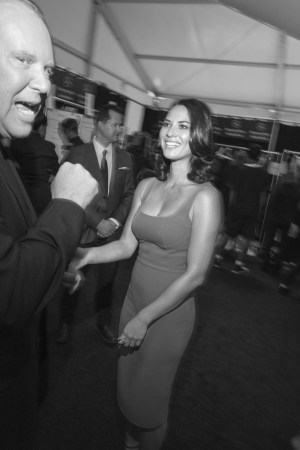 The tail end of #NYFW provided senior moments for at least a couple of fashion icons. Gloria Vanderbilt made a rare appearance at a gala benefit celebrating her paintings at the New York Design Center.

A pioneer in brand merchandising, the famed heiress unfortunately did not wear her signature jeans to the event.

The exhibition combined the old with the new; a romantically beautiful self-portrait from 1957 along with other gems mixed with recent collage work.

Not wishing to dwell too long in the past, the octogenarian and her son, Anderson Cooper, took off into the night after a brief meet and greet.

Joyce Carol Oates, on the other hand, was happy to meander down memory lane. Wearing Issey Miyake, the author proudly showed guests the three portraits of herself painted by Vanderbilt.

On Tuesday evening, Betsey Johnson threw a farewell fashion show showcasing her magnificent run from Twiggy to twilight. The show was a raucous celebration, in spite of the brand having filed for chapter 11 in April. Johnson, like Vanderbilt, decided to contrast the old with the new. The final collection was introduced by four decades of designs showing her offbeat sensibility but also motifs that would now be considered politically incorrect: cigarettes, guns, and raccoon tails! Cyndi Lauper, wearing a black Betsey tutu, performed a rocked out updated version of her hit ballad “True Colors” which had the audience in a frenzy. Johnson, of course, ended the show with her signature cartwheel down the runway. At age 70, we should all be so lucky… and flexible!