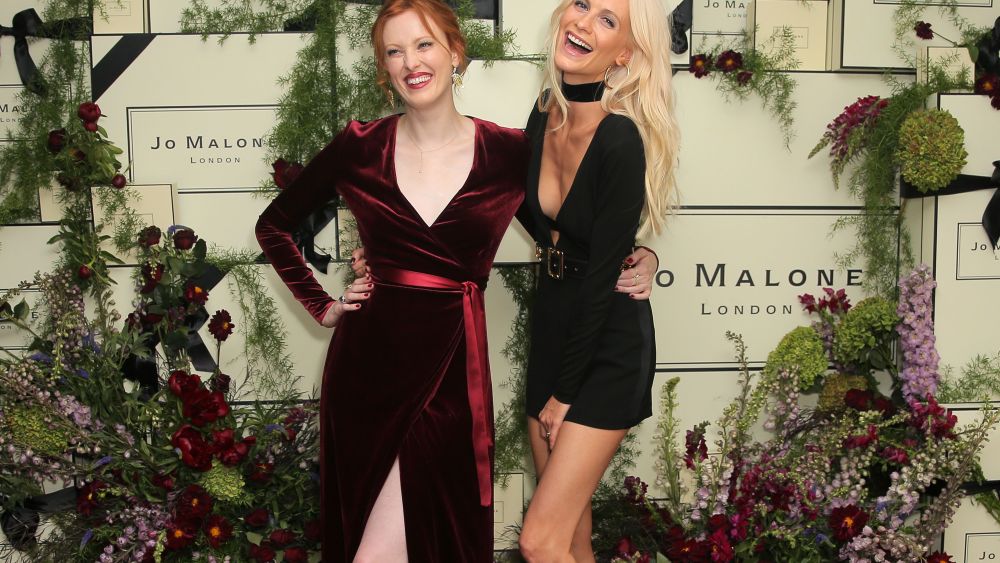 Karen Elson advocated mixing up her friends from fashion, beauty and music at the Chateau Marmont on Thursday night, a concept that melded with the philosophy held by her new employer, Jo Malone London.

As the scent of red rose mixed with lime basil and mandarin throughout the bungalow, the new Jo Malone London Girl mingled with Poppy Delevingne, Fuschia Sumner, Mary Charteris, Marie-Lou and Chloe Bartoli, Jessica Joffe, Asia Chow, Lily Oakes and others. Delevingne took on double duty as the first Jo Malone London Girl and as the evening’s hostess welcoming Elson to the British fragrance company.

“It’s all about experimenting and bringing changes,” Delevingne said. A fan of Jo Malone London’s “Red Roses” cologne since she was 18, the towering blonde said she opted for “Tuberose Angelica” that night. “It’s a little sexier. Whenever you go to Chateau Marmont, you have to be a little sexier,” she said, showing off her long legs in a black romper.

Elson relished the opportunity to follow her olfactory whims, which took her full circle to Los Angeles. She received her first Jo Malone London bag of goodies from a friend years ago when she visited the city. She started the day smelling like a bluebell, then became enamored with the combination of incense and cedar. To accent her red velvet dress for dinner, she picked “Velvet Rose and Oud.”

“I’ve been the face of fragrances before. This is a different experience to be a cultivator,” she said. “It’s been really fun to bring the really amazing women that I know together to just collaborate on this. So in a way it’s a dream gig.”

Those women included Tennessee Thomas, who mixed songs under silver sequin-sealed nails. Liz Goldwyn reminisced of the project she and Elson undertook two years ago to raise more than $100,000 for Dress for Success from the sale of their vintage clothes that were reworked by designers such as Marc Jacobs, Gregory Parkinson and Rodarte’s Laura and Kate Mulleavy. “We’ve been talking about expanding it to more ready-to-wear projects,” she said.

Goldwyn’s other endeavor involves the spring launch of her third book and a new podcast, both about sex, health and consciousness. She’s also made time recently for vintage shopping in Milan with Elson. “We never fought over anything,” she said. “We intersect on the Twenties and Seventies. My go-to is the Fifties and I’d say hers is the Thirties.”

Dita Von Teese has her own fashion friend in none other than the Duchess of Cambridge. For Von Teese’s burlesque tour starting in February, she’ll visit new stops such as Toronto and Detroit with costumes designed by Jenny Packham, the British designer who is a favorite of Kate Middleton’s. “I know,” Von Teese said when asked about how two women from different walks of life merge onto the same aesthetic. “I like cuts and styles that are quite elegant,” she said. “I like the thrill of the reveal. I can see why we both like [Packham].”

For the night, Von Teese served as the muse for John Demsey, executive vice president at the Estée Lauder Cos. Inc., who rushed over to brandish his phone, which popped with red, black and tan illustrations of the dancer. “I’m going to have my powder room with my Dita Von Teese wallpaper designed by Donald Robertson surrounded by Jo Malone scents,” he beamed.

On the other hand, Liberty Ross stood out as perhaps the sole Brit who missed a spritz from the British perfumery. “I haven’t been offered any,” she opined. “I need to get some.”

Rain Phoenix, who was one of the 20-odd members of Citizens Band alongside Elson, looked forward to sniffing the Jo Malone London Girl’s home in Tennessee come December, when Phoenix’s band with Frally Hynes is set to perform with Rufus Wainwright and Emmylou Harris at the Ryman Auditorium. “She’s going to have the most lovely smelling house in Nashville,” Phoenix said. Having released an album titled “Brother, Son” over the summer, Phoenix and Hynes are in tune with each other when it comes to activities involving ear and nose. “I’m always a fan of tuberose,” Phoenix said, “and anything with lavender.” “Or vetiver,” Hynes said. Regarding the opportunity to conjure a perfume for their band, Phoenix said, “we would love to — an interplanetary scent” to match their moniker, Venus and the Moon.

After a British-inspired dinner of roasted chicken, Dover sole, peas, carrots and sticky toffee pudding, Phoenix and Hynes serenaded the guests with a trio of ballads. A strong whiff of cannabis floating from outdoors blended with all the various scents in the unseasonably warm air. “It’s very L.A.,” Phoenix said.