The brand decked out its London townhouse like an English garden for the occasion. 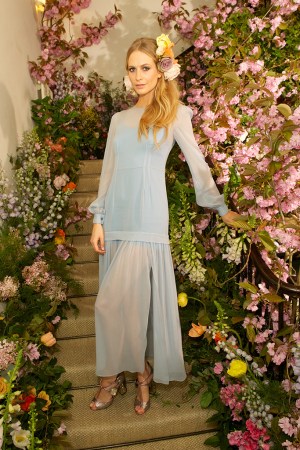 LONDON – Poppy Delevingne celebrated her appointment as Jo Malone London’s first ambassador by hosting a party at the brand’s Georgian Townhouse in London Thursday night, where the fragrance house had created an indoor English garden that bloomed with cherry blossoms, foxgloves and poppies.

The hostess arrived at the party in an Aston Martin, wearing a pale blue, drop-waist silk dress she had created together with Jonathan Saunders. “We designed it in about fifteen minutes and then went about the business of having fun,” Delevingne said. “I wanted it to be cornflower blue so that I could coordinate with the flowers; Scarlet & Violet did them – aren’t they amazing?”

Saunders said that he and Delevingne were like “two naughty school kids” creating the dress together. “When Poppy asked me to design her dress for the ball and told me it was a blossom theme, the first thing I said was, ‘it cannot be a floral dress’,” he said of resulting diaphanous gown with no print.

Among the guests at the ball were David Gandy, Daisy Lowe, Matthew Williamson, Savannah Miller, George Lamb, Bay Garnett, Laura Bailey, Jasmine Guinness, Alice Temperley, Marissa Montgomery and Delevingne’s parents, Charles and Pandora, who all partied to the harmonies of acoustic group Three & A Half Men, the same band that played at Delevingne’s wedding to James Cook last year.

Guests took full advantage of the countless selfie-worthy floral tableaus throughout the space, including a swing suspended beneath a bough of cherry blossoms, along with foxgloves, roses, ivy, sweet peas and – fittingly given the brand’s new muse – poppies, all of which appeared to grow within the house.

“Downton Abbey” star Laura Carmichael, who was wearing a Markus Lupfer dress, said she had mixed feelings about filming the last season of the hit television show. “I do feel sad that it’s the end but I am excited about what’s next. But I had a dream this week that it was my last day on the show and I felt totally bereft. I got picked up and driven to the set and all the way I was so upset,” she admitted.

Stylist Pippa Vosper joked that she looked like a milkmaid in her pastel Vilshenko floral patterned dress. Vosper has recently opened RSPV, Resurrected Season by Pippa Vosper, a shop that works with one designer at a time to sell a curated edit of past season collections and samples for one-month periods. “I didn’t tell any of my friends that I was going to do it, I just did it,” she said. “And it’s been a great success. It’s like a sample sale, and I love a sample sale.”

After the London event, Delevingne’s ambassadorial duties for the beauty label are set to stretch beyond her home city, with the model to host a dinner for Jo Malone London in Los Angeles in the coming months.