After dinner, the crowd made its way to the Temple of Dendur for the official after party and performances.

By Marc Karimzadeh and Matthew Lynch and Taylor Harris on May 7, 2013
View Slideshow 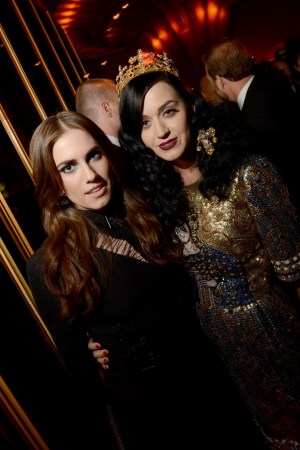 Punk, as a movement, bucked convention. Although only a handful truly followed suit fashionwise at Monday’s Costume Institute benefit, real rebel behavior was in the details. Cigarette smoke was emanating from the ladies room, and people started table hopping pretty much the second they sat down in the Metropolitan Museum of Art’s Charles Engelhard Court. Taylor Swift made a beeline for Lena Dunham; Chris Martin breezed by with Beyoncé, and Christoph Waltz, sitting at Miuccia Prada’s table, was in deep conversation with architect Zaha Hadid.

After dinner, the crowd made its way to the Temple of Dendur for the official after party and performances. Graffiti banquettes dotted the space; giant projections of punks poguing lined the walls, and thematic desserts included skull cookies and cupcakes with an edible cigarette put out on the icing.

“I would recommend vodka Jell-O shots, they are amazing,” Florence Welch told the crowd, before introducing Blondie. Debbie Harry, in Givenchy, belted out “One Way or Another,” “Follow Me” and the Beastie Boys’ “(You Gotta) Fight for Your Right (to Party!).” By the time she got to “Heart of Glass,” everybody was dancing, even the too-young-to-remember-punk ones like Emma Watson and Wes Gordon. Follow-up act Kanye West struck a tougher, more sinister note, wearing a studded mask for his “I Am  God” opener.

RELATED STORY: Anarchy at The Met: ‘Punk’ Makes Its Debut >>

In all, the night raised $11.3 million for the Costume Institute.

After the after party was, of course, the after-after party, one last official leg of the tour hosted by gala chairs Riccardo Tisci and Lauren Santo Domingo at the Top of The Standard at The Standard High Line. Post-gala partiers mingled with those who had spent the night cooling their heels in a crush that was slightly more hazardous than in years past, what with all those studded and spiked shoulders. Sky Ferreira, accompanied by Allegra Versace and Grimes, and wearing a black balaclava, decided the floor of the entryway was as good a place as any to change her shoes. Frank Ocean, who had earlier donned a pink ski mask, left the wooly headgear to Ferreira here. Chris Brown, who not too long ago allegedly threw a punch at Ocean over a Los Angeles parking space, was there too, nodding his head to Rihanna’s “Only Girl in the World.” Tiger Woods bid girlfriend Lindsey Vonn to a banquette and squared up to the bar to order.

The apex of cool in the room was easily Tisci’s booth, atop which sat a host of Givenchy-clad beauties. Rooney Mara smoked a cigarette with the designer. Amanda Seyfried, who had changed into an oversize Givenchy T (no pants), plopped herself on the cream banquette and joined the group. Soon Madonna, whose post-ball ensemble consisted of little more than lingerie and a fishnet body stocking, rolled in with a six-person posse, causing some musical chairs. Madge saddled up to Tisci and basked in the gawking crowd’s stares.

Across the way, Mary-Kate Olsen grooved with beau Olivier Sarkozy, waving hello to Theo Wenner between moves and drags of her cigarette. Ashley Olsen got up from the table soon after Julianne Hough stopped by to introduce herself, hitting the bar and saying hello to Humberto Leon on the way.

Seth Meyers attempted to pass through the thicket, sliding past Aubrey Plaza, prompting the slightly slurry Plaza to ask, “Where are you goinggg?”

Leonardo DiCaprio arrived late and underdressed. The actor, shepherded along by Vito Schnabel, peddled through the crowd with his newsboy cap predictably ducked down, a Camel cigarette in his hand, and asked photographers to refrain from taking his picture.

Downstairs, Welch and Kate Bosworth conspired to flee to another bar in punk’s once-upon-a-time homelands.

“Where is this bar?” Bosworth asked. “Seventh and A?”