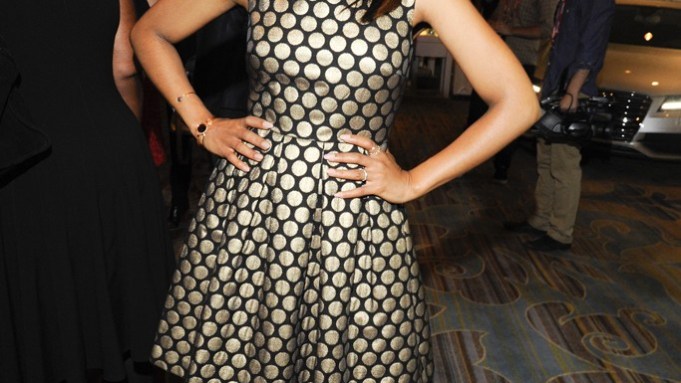 At Variety’s Power of Women luncheon at the Beverly Wilshire Hotel in Beverly Hills on Friday, Charlize Theron and Amy Poehler proved that being powerful doesn’t mean you can’t cry in public.

Poehler typically has a room in stitches, but the comedian had most attendees fighting back tears as she discussed her work with the Worldwide Orphans Foundation. “There are so many children who have nothing,” said the honoree, her eyes welling up. “So who are we to be in this room and to be living this life without helping? That’s the simple truth.”

Theron’s waterworks began when she accepted an award on behalf of her nonprofit, the Charlize Theron Africa Outreach Project. “I hope they’re OK with me giving [this award] to my mom,” she said. “That b-tch was building roads in Africa when no woman was doing that.…So I thank you, mom, for teaching me through your actions how to be a strong and powerful woman.”

Earlier, Theron joked around with fellow honorees Elizabeth Banks (who received the American Heart Association’s “Go Red for Women” Award), Sony Pictures cochairman Amy Pascal (honored for her work with Teen Line) and Nicole Kidman (who works with UN Women) over cocktails. “I was just saying to Nicole, ‘We really don’t need to get awards. We could seriously go and just get drunk, you know.’ That’s all I need — to be in the same room as all of them [with] a bottle of Champagne,” laughed Theron.

Kidman was pleased to be at a philanthropic-based award show, which was presented by Lifetime Television. “Usually you’re asked about your dress or your jewelry, your kids, but this is about our causes and our beliefs,” she said. “For me, it’s about gender equality and eradicating violence against women, so I’m just grateful to have the opportunity to talk about it.” A reporter then dared to inquire who she was wearing. “You can’t ask that after I just said that,” she teased.

Once the crowd’s tears subsided, Poehler ended the afternoon on a lighter note, telling everyone, “If you take one thing from this event, please remember…giving to charity is good for your skin and makes your ass smaller.”