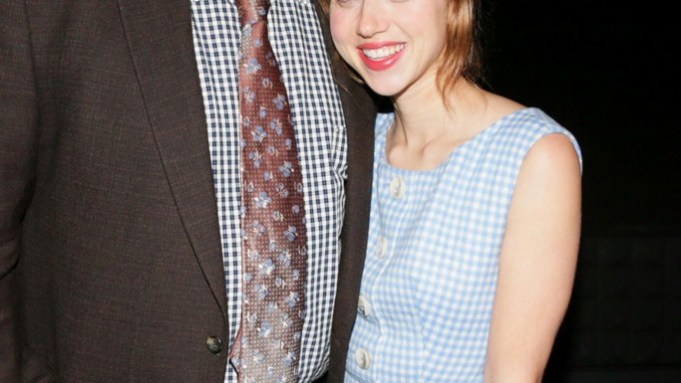 NIGHT READING: “I always get nervous for public speaking,” said Zoe Kazan at Prada’s flagship in New York’s SoHo neighborhood, which had been transformed into a provisional theater on Wednesday night. “I’m not a natural public speaker.” The actress, joined by literary luminaries Jonathan Ames, Jay McInerney, Gary Shteyngart and actor Anthony Mackie, was one of the chosen speakers tasked with reading excerpts of the winning entries from Prada Journal’s literary contest.

The writing competition, launched last April in conjunction with Italian publishing giant Giangiacomo Feltrinelli Editore, received more than 1,300 entries in over 29 languages, with 13 runners-up and five winners — Mattia Conti, Leisl Egan, Angel Mario Fernández, Sarah Harris Wallman and Peng Yang — four of whom were flown in especially for the event (and all of whom will receive cash prizes and their work published in upcoming digital and print booklets). The event was billed, loosely tying in an optical theme: “What are the realities that our eyes give back to us? And how are these realities filtered through lenses?”

Kazan, supported by bestie Mamie Gummer and beau Paul Dano, has been flying back and forth from Boston while working on her new HBO miniseries “Olive Kitteridge.”

“It’s crazy out there around Halloween because [Boston] is right near Salem,” she said. “And Salem just goes insane for Halloween, apparently. I don’t like Halloween. It’s just…not for me.”

Dano, suffering from a torn ACL, was sporting a cane. “I’ve gotten used to it,” he was overheard saying of the walking stick. “It’s a statement. I kind of like it.”

“I’m Oliver Platt, and I’m the new face of Prada,” said the actor, who stepped up to the podium as the evening’s official emcee. “Just kidding. But they are that visionary, and they are that cool.”

For his part, Ames regaled the crowd with a childhood bullying story. “My friends and I would get attacked on the playground by more normal people,” he said, before loudly imitating a set of calls they would use to each other for help. “By the way, I’ve never worn such beautiful clothing before,” he continued. “I want to thank you, Prada, for this suit. The thread count alone — it feels very therapeutic. I feel like an NBA player — it’s like, ‘Oh, this is why they’re so into clothing.’ It’s sort of caressing me.”

Conti, 24, whose story was read by McInerney, said in his broken English that it was his first time to the U.S. from Lecco, Italy. Harris Wallman, 35, a Connecticut-based professor, said her story, read by Kazan, was about “anonymous sex on trains,” before clarifying that it was not autobiographical. “I almost wrecked my car [when I found out I was a winner],” she said.