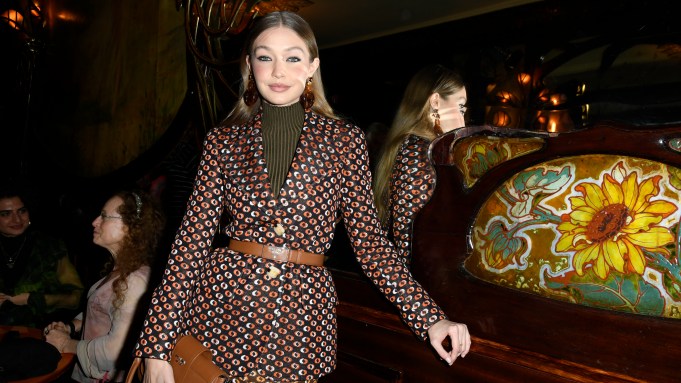 FACE TIME: How exactly does facial recognition work? And more importantly — whom does it benefit?

These are some of the questions raised by “Making Faces,” an installation conceived by AI researcher Kate Crawford and artist Trevor Paglen for Prada Mode, a two-day cultural event held in Paris on Jan. 19 and 20.

Following stints at Art Basel Miami and Frieze London, Prada Mode, which takes the form of a traveling social club with a focus on contemporary culture, took over Belle Époque restaurant Maxim’s where it also hosted talks, DJ sets and an intimate dinner on Sunday evening.

Crawford, whose work is on show at the Fondazione Prada in Milan as part of “Training Humans,” an exhibition also conceived with Paglen, has been working on facial recognition and artificial intelligence for more than two decades.

“There are only so many papers you can write, and these will only ever reach a niche audience,” she said. “What we have to do in this new decade is to create a much bigger public conversation about the politics of technology — specifically who gets harmed, who is at risk, and who are the people who will benefit from it — and really make sure we are making a choice. At the moment, things are done in secret: suddenly you have to use facial recognition to get on the plane at an airport. These are not happening as democratic conversations, but as top-down, highly concentrated decisions made by powerful entities.”

The installation takes a critical look at current surveillance and policing systems, tracing back to the 19th century when mug shots were used to help detect potential offenders. One of the tools featured is Imagenet Roulette, a facial recognition software that classifies faces depending on the information scanned by the camera.

“The aim of ‘Training Faces’ was also to show how sh–ty the tools are,” said Paglen. “We imagine AI as something amazing, but this is the current state of the tools that are used — they are terrible and we should not trust them.”

“If you wear a hoodie, you’ll be categorized as a first offender,” continued Crawford. “That shift between description and judgement is right where you can see how malleable AI is, as well as flawed. According to Imagenet, I am a 25-year-old male.”

Talk shifted to art in general during the Prada dinner organized in partnership with Vogue on Sunday evening, attended by Miuccia Prada herself.

Model Gigi Hadid happily chatted about her budding art collection. “I’m just starting to buy art,” said the model. “I got a good piece of advice one day: buy art that confused you a little bit because then you’ll never get tired of it and you’ll always have something that you are questioning about it. I try to bear that in mind whenever I buy a new piece.”

“I didn’t really see it as a comeback,” said the actress and model, who hadn’t walked a fashion show in almost a decade. “I did it because I really wanted to work with Simon. I wasn’t really thinking about the fact that I was getting back into walking shows, but more like I was bringing the person I am today to the runway. Also, meeting Simon was such a beautiful moment.”

Sipping Negronis and gin and tonics, guests chatted about the latest exhibitions they had seen. Julie de Libran, the former creative director of Sonia Rykiel who now has her own brand, discussed the Charlotte Perriand exhibition currently on show at the Fondation Louis Vuitton, but suddenly remembered a more emotional cultural outing.

“I remember being at the opening of the ‘Schiaparelli and Prada: Impossible Conversations’ at the Metropolitan Museum in 2012,” said the designer. “As I worked for Prada for over 10 years, it was incredible to see the collections in a museum. It’s a treasured memory.”

“We went to see the exhibition on Marie-Antoinette at the Conciergerie,” said the designer and model, who co-hosts Netflix’s “Next in Fashion” show with “Queer Eye”’s Tan France, set to premiere on Jan. 29.

“We learnt that before getting guillotined, she had to have an awful haircut,” said her boyfriend Orson Fry.

“So now we’re going to call all bad haircuts ‘the guillotine,’” grinned Chung.