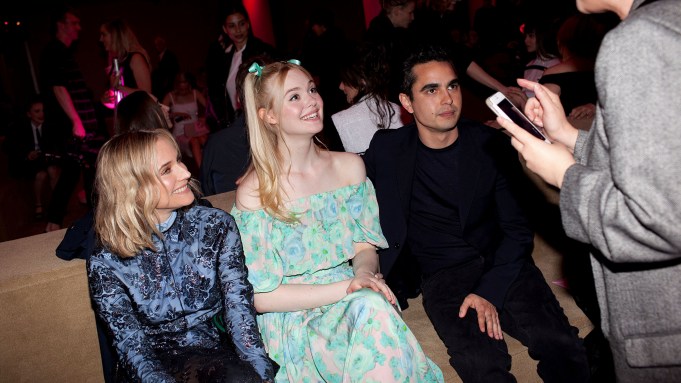 As the sun set over the West Side Highway and Hudson River, the sixth floor of Prada headquarters, The Piano Factory, grew increasingly dim. But there was still plenty to see, as the crowd sipped Champagne from coup glasses ahead of the house’s resort show upstairs and tried to make out who was who around them.

Elle Fanning, who attended the show with boyfriend Max Minghella, had gotten a preview of the show space. “I got here very early and walked upstairs, and it was totally empty, so I got a little photo op of myself alone,” said the actress, who’s in town to attend the Met gala with Miu Miu on Monday. “I live in L.A., so it’s always a treat when I get to come to the city. I don’t have anything planned [for the weekend], but maybe try and see a show or something.” But first: her first Prada show. “I always go to Miu Miu, I don’t think I’ve ever been to the Prada show. My sister has, but I haven’t.”

“Prada’s one of the brands that I’ve loved ever since I was little,” said the 17-year-old “Stranger Things” actress, upstairs in the pink carpeted show space. “I’ve been to the Miu Miu show but Prada feels different; it’s a different feel.” Sink has a busy summer ahead, including a few new projects filming in Atlanta. “So I’ll be going back to Georgia where we film ‘Stranger Things.’ It’s about to get really busy, especially with press for season three and the season three premiere.”

She might just run into Mena Massoud while she’s down South.

“About to do the press tour,” said the “Aladdin” actor of his forthcoming plans. “After the press tour, I go off to North Carolina; I’m shooting a new series with Rodrigo Santoro and Abigail Spencer.” Massoud was attending the resort show with his stylist, perhaps to get inspiration for his upcoming red — and magic — carpet looks. “This setup is very unique. I have no expectations,” he added, surveying the show space. “So just taking in some fashion; I’m an artist, I went to theater school — this is a form of theater.”

Indeed, and there was plenty of cast to take in: Shailene Woodley, greeting Natalia Dyer; Diane Kruger; Uma Thurman, who attended with her son, Levon Thurman-Hawke; Naomi Watts; Joel Edgerton; Anderson Paak; Hailee Steinfeld, and Casey Spooner, dressed in short denim shorts, a cowboy hat and sunglasses. Dress for the weather you want?

“I’m always curious to see what Mrs. Prada does,” said Sofia Coppola as she made her way to her seat. “I love to see the whole atmosphere, experience and her designs. And I’m a fan of design and fashion.”

After the show, guests continued to mix and mingle in the space during an informal dinner, as models like Gigi Hadid, as well as Miuccia Prada herself, made an appearance. Guests’ reaction to what they’d just seen was, not surprisingly, very positive. Dane DeHaan had a particularly nuanced take.

“I loved it,” said DeHaan, outfitted in a Prada tie-dye sweater. “I think Prada is always a step ahead of its time. I think we’re seeing things today that a lot of people will pick up in their seasons in futures to come, and it’s truly brilliant. A mix of patterns, the use of things that you would find maybe in everyday, mixed with things such as the sequined hats, which are maybe a more modern innovative take on things,” he continued. “I think it was an amazing mix of the new and classic, like you always find with Prada. My favorite thing about Prada is a sense of irony. When you see the open-toed shoes with the white socks, I love it, it’s like aesthetically so incredibly pleasing. And only Miuccia Prada could think of something like that.”

His wife, Anna Wood, agreed with his take.

“He models for them, too, so he’s like a Prada family member. He’s very up on his Prada,” Wood said. “I would only [add] that I love Prada for its tongue in cheek-ness. I love that it’s art with a sense of humor, always.”

And, yes, there truly is a first time for everything — Marc Jacobs and Char Defrancesco were attending their first fashion show as a married couple.

“We were at this show last year, but we were just boyfriends — we were fiancés,” said Jacobs, before catching sight of one of his pals. “Hi, Uma!”

“I loved it. Did you love it?” said Jacobs, turning to his husband.

“I loved it. It kind of gave me like a teacher fantasy. Just like chic teachers,” Defrancesco said.

“I always love when Prada is like Prada,” added Jacobs. “To me, this was just a really fresh take on everything I love about Prada. Like the coats over the skirts. I think the girls look great, and it’s just always so cool. I liked the oversize coat in the beginning, the navy coat. I liked some of those embroidered smocked blouses over the skirts.”

“And the shoes,” added Defrancesco. “Those were everything.”